The Flushing City Hall meeting chamber is now equipped with microphones and a camera to help broadcast city council and committee meetings to the public. Photos by Ben Gagnon

FLUSHING — Flushing residents will soon have a new way to attend city council meetings and interact with elected officials…all from the comfort of home.

Starting last month, the City of Flushing began installing audio and visual equipment inside the Flushing City Hall meeting chamber to live stream public meetings. Although the city council has been streaming meetings via the Zoom app throughout the COVID-19 pandemic, the new technology setup will allow viewers to watch council proceedings with a much clearer video and audio quality on multiple devices and online platforms.

During its most recent meetings, the city has been testing its live streaming equipment to work out a few kinks and fine tune acoustics in the city council chamber. Interim City Manager Clarence Goodlein said that the streaming of meetings on YouTube and other video platforms—in addition to Zoom—should begin as early as February or March.

“What we hope to accomplish is to give greater accessibility to people who sometimes can’t come down to meetings,” he said. “This will allow people to connect on their desktops, laptops or mobile devices to watch meetings live as they occur.” 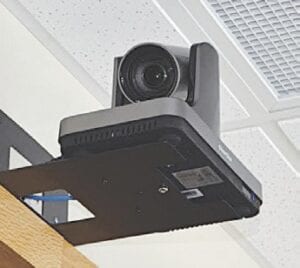 Goodlein said that people will also be able to pose questions and make statements during the public comment section by “dialing in” through Zoom.

Flushing Mayor Joseph Karlichek said that live streaming will help keep citizens informed and give them another platform to make recommendations and provide feedback to elected and appointed officials.

“We need to build our community up with our citizens,” he said. “We need their talent. We need their help. This is just one way that we can provide that access…and provide transparency with our local government.”

In addition to streaming council meetings, the city will make every open public meeting available to watch online, including Zoning Board of Appeals (ZBA), Planning Commission, Parks and Recreation and Board of Review meetings. Recorded meetings will also be available on YouTube and other video platforms.

While live streaming will help the public to watch council meetings from home as COVID-19 restrictions continue, city officials are optimistic that the technology will continue to be useful for residents even after the pandemic ends.

“If we all had to point our finger at one thing that we believe has caused problems in our society and country… it’s that people don’t have good access to government and elected officials,” said Goodlein. “I think this will make people more comfortable with government, and it may even encourage them to get involved with boards and committees.”

The city’s live streaming equipment, which was installed by Metro Detroit Integrated Systems (MDIS), was paid for with around $14,000 of Public, Educational, Government Access Television (PEG) funds. PEG funds are primarily used by municipalities for technology upgrades and special projects to increase public access to government—including live streaming capabilities for meetings.