City opts to leave Riverview Trail unplowed in the winter 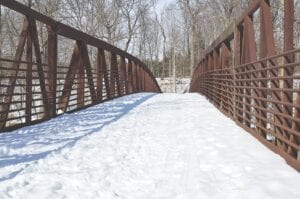 Although the Riverview Trail accumulates snow and ice, it is still well-traveled by residents during the winter months, especially over the Riverview Bridge section pictured here. Photo by Ben Gagnon

FLUSHING — The City of Flushing has opted to leave the city’s scenic Riverview Trail unplowed during the winter months, due to logistical reasons and liability concerns.

At Monday’s meeting, Flushing City Council discussed the feasibility of removing snow and ice from the Riverview Trail and its bridge and boardwalk sections along the Flint River. Council members picked up the topic after the city received several requests from residents who want the trail to be cleared for walkers and runners in the winter.

After much discussion, the council unanimously chose to leave the 1.4- mile trail unplowed, saying that the city simply lacks the resources to keep the paths cleared of snow on a regular basis.

“The DPW (Department of Public Works) just doesn’t have the manpower to clear the trail, since the boardwalk area can only be cleared with plastic shovels and you can’t drive a tractor over the bridges,” said Mayor Pro Tem Edward Sullivan. “Everything would have to be shoveled by hand. You also can’t use sand or salt on the bridges because they go over the waterways.”

In a feasibility report to the council, Interim City Manager Clarence Goodlein said that clearing the paved areas on the trail would allow for deeper penetration of frost and expose the concrete portions to potential weather damage in the winter. He also said that plowing the paths of snow would deprive cross-country skiers and snowshoers the chance to use the trail for winter recreation.

Mayor Joseph Karlichek said that he didn’t want to overburden the DPW with another task in addition to duties of clearing snow from roads, parking lots and sidewalks.

“If we had a plethora of DPW staff and money was no object, it would be great to have the trail cleared regularly,” he said. “But I think it will expose the city to increased liability if we start clearing out the trailways and someone still slips and falls on a patch of ice. I don’t want to see our city put into a legal situation, on top of extending our DPW’s manhours.”

Goodlein said that leaving the Riverview Trail unplowed is in the best interest of the city’s liability concerns because the trailways are already posted with signage that warns users that the paths are not maintained and that they may be slippery due to ice, snow or wet conditions.

Sullivan also pointed out that the walking paths in Riverview Park are regularly maintained, offering residents a safer alternative for exercise and recreation during the winter months.