Mayor also looking ahead to city’s 50th anniversary in 2022 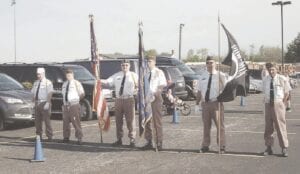 A look back at a previous Memorial Day celebration in Burton. File photo

BURTON — Officials are planning to observe the city’s 25th year of holding a Memorial Day celebration and parade, May 3 – if COVID-19 cooperates, that is.

Mayor Duane Haskins told the city council, Jan. 7, a committee is being set up to make plans for the celebration, which will mark the silver anniversary of the annual event.

The committee will either meet in-person, if COVID restrictions allow, by the middle or end of February or electronically if it must.

Haskins also said the Memorial Day event, which was cancelled last year due to the pandemic, will be subject to the same considerations again this year.

“We’ll just keep preparing for it as if it is going to happen and if need be, and we’re not allowed to, of course, the cancellation will come into effect. we’ll cancel it if we have to,” said Haskins. “Obviously, we know, it’s more difficult with events of this nature because we do try to get a lot of financial donations and financial backings, supporters, volunteers.”

He added it is difficult with COVID-19 restrictions in place to get out and solicit that type of support from the community.

The pandemic has also created a situation where many businesses are struggling financially and are waiting for a return to normal before they can donate to community causes, said Haskins.

“So, needless to say, we are still moving forward and planning for it, so hopefully we can get through all the mess of the virus and proceed forward in that fashion,” he said.

Haskins said he met with Burton Fire Department Captain Jeremy Scharrer, who also serves on the Burton Parks and Recreation Committee, about the city’s plans for its 50th anniversary celebration in 2022.

He said the city is still gearing up and planning for the anniversary of Burton becoming a city, but he said that too will be subject to situation with the pandemic.

“We’ve got a lot of great ideas and a lot of preparation to do, with a lot of volunteers who are going to have to be involved with that,” said Haskins. “We’re reforming the committee and getting the committee back together again to keep rolling forward on that.”

He said, however, the celebration will be a “financial burden” as well to try and accomplish a “great, festive, memorable anniversary.” To accomplish this, Haskins said the city will use the time it has between now and 2022 to continue planning and moving the effort along for a celebration.

But, he added, “I can’t say this enough – it’s all going to depend on COVID and how we’re able to move forward.”

Scharrer said at a parks and recreation meeting last February that July 1, 2022 is the official 50-year mark. At that time, pre-pandemic — the city was taking proposals from various groups and put together an event schedule, but it was decided each group would have to fundraise to support whatever they plan to do.

Scharrer said he researched what other, larger cities did and as an example, he said Novi did a formal gala dinner which might be possible if they can find a large enough venue to host it, suggesting Abbey Hall (South Flint Tabernacle) might be the only place in Burton which would be big enough.

Other suggestions included a graded essay or poster contest which someone at one of the school districts might want to head up with possibly a local business sponsoring it with a small scholarship attached for the winners at various grade levels. Also suggested was a business expo, a “Burton Idol” singing contest, a pie in the face event or a “Jail and Bail” fundraiser where people pay to issue a warrant to have other people “arrested” and the “bail” money being donated to charity.

None of the suggestions put forward have been officially approved at this point.