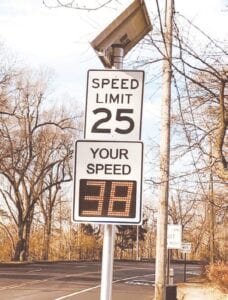 Radar speed signs on Main Street monitor the speed of drivers heading into and out of town. Photo provided

FLUSHING — Speeders beware: The City of Flushing is on a mission to crack down on speeding and reckless driving on its busiest streets and neighborhood roads.

Entering 2021, the Flushing City Police Department has beefed up traffic enforcement by conducting more traffic stops and utilizing radar speed signs throughout the city. Meanwhile, Flushing City government is gauging citizen feedback to determine which streets are showing the most improvement with traffic and which ones need more enforcement on speeding.

“Roughly 25 percent of our traffic crashes have some form of injury associated with them,” Hoornstra said. “When you travel much faster than the designated speed limit and come to a sudden stop, your chances of getting hurt are greater. If we can slow traffic down, we should be able to reduce some of those injuries.”

According to the National Highway Traffic Safety Administration (NHTSA), 1/3 of all motor accident fatalities involve speeding and 70 percent of all fatal crashes on roadways with speed limits of 40 mph or less happen in urban residential areas.

Because Flushing’s main thoroughfares are lined with houses, Hoornstra said that speeding creates many hazards in the city that aren’t prevalent in industrial or business areas.

“When people are speeding on Main Street, it’s right in front of people’s yards,” he said. “You’ve got people walking, people on bikes, pets in the yard, kids playing. The potential for accidents and injuries increases.”

Radar speed signs are another tool that the city is using to deter speeding in Flushing. In 2020, the police department installed two permanent speed signs on Main Street and began rotating two portable signs across 11 different locations in the city, including River Road, McKinley Road, Coutant Street, Sunnyside Drive and Deland Road.

The portable signs are battery-operated, while the permanent signs on Main Street are battery-powered with solar rechargers.

Hoornstra said that his department is planning to analyze data gathered by the speed signs to see where the greatest speeding problems are and learn how effective the signs have been in terms of enforcing speed limits.

“In the past two months, I’ve received many calls, text messages and messages on Facebook thanking us for the signs and the blue lights flashing on their streets,” he said. “They’re seeing improvement, and we want to build on that.”

Karlichek said that the city will also address other citizen complaints about speeding commercial vehicles and big trucks, while continuing to educate the public on the dangers of speeding and reckless driving.

Some of the messages that Hoornstra and Karlichek want to convey to motorists include: “Think about the ticket”; “Leave on time to arrive on time”; and “Be a courteous neighbor.”

“I think if we can just continue to generate some more understanding and the importance of taking personal responsibility, we can reduce the load on our police officers and concentrate our efforts toward data-capturing and narrowing down time and locations where speeding is a big problem,” Karlichek said. “We want to have a consistent message that lines up with our expectations: ‘Speed in Flushing, and you’ll get pulled over.’”