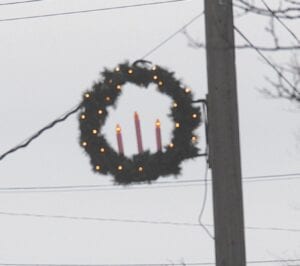 One of the few Christmas decorations put up this year by the city of Burton along Saginaw Street. Photo by Gary Gould

BURTON — The city managed to decorate the light poles along Saginaw Street this Christmas, where possible, but in order to do a thorough job next year, it will need to buy new decorations and repair damaged electrical fixtures.

Mayor Duane Haskins told the city council Dec. 21 the Department of Public Works was able to place some decorations of light poles along S. Saginaw Street before Christmas this year, but the effort was incomplete due to aging, damaged decorations and electrical issues.

“As most of you know, or see, we tried to get some of our Christmas decorations up,” said Haskins. “Obviously, we still had electrical issues with electrical outlets, things like that, some of them not working. We tried to get up as many of them as we possibly could this year. Still looks OK, but not as brilliant or resilient as normal.”

He said the administration has checked into purchasing new decorations and the cost ranges anywhere from $20,000-30,000.

Haskins said his staff would go ahead and replace some decorations, which city council said it was OK with in November. There were no objections by the council.

The city could get started on buying replacements after the first of the year and work throughout the year to get everything repaired and the new decorations integrated so next holiday season they can be in use.

Haskins told the council in November some of the decorations are 15-20 years old now and replacing them boiled down to a cost factor.

City Council President Steve Heffner said residents had complained to him about the decorations not being put up since last year.

Heffner said in November because the parks and recreation department had its entire year cancelled due to coronavirus, including events like the Memorial Day run, the Trick or Treat Trail and the Easter Egg Hunt, there was unused money in its budget to the tune of somewhere between $30,500- $33,500.

Council Vice President Greg Fenner said there is still an issue with the electrical fixtures that are also 15-20 years old. They’ve been up for a number of years and are unsafe for workers to get up and plug them in, he said in November.

The purchase of new decorations and the repairs to the electrical system are expected to happen sometime this year.