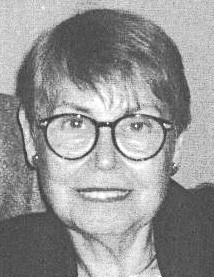 CLARA CECELIA JANE JACKO, 99, of Grand Blanc, passed away Friday, February 5, 2021, at home with her family by her side. In accordance with Clara’s wishes, cremation has taken place. There are no further services scheduled at this time. Expressions of sympathy and memorial contributions to the Kalamazoo Humane Society or Alzheimer’s Association may be placed on Clara’s tribute page at martinfuneralhome.com.

Clara was born in Duquesne, PA, on January 3, 1922, the daughter of Mr. and Mrs. John Vincent and Julianna (Vislay) Genes (Gyenes). Clara graduated with the Class of 1940 from Duquesne High School. Clara’s mother died when she was only five years old. After graduation, Clara took care of and helped her father with his coal hauling business and her family home, helping to raise the two younger children. After the war, a shining handsome marine named Robert J. Jacko showed up at the local roller skating rink, and from that day on, they started dating, fell in love, and Clara asked him to marry her in 1947. The two were united in marriage on June 21, 1947, in Duquesne, PA, at St. Joseph Catholic Church. Sadly, he preceded her in death on June 24, 2008. In 1965, Fisher Body opened a new plant in Kalamazoo, and they moved their family there for work. Taking care of her family was her pride and joy. She bought a little white Cape Cod home on two lots that she kept immaculately, on Old Colony Road in Kalamazoo. Clara was a perfectionist when it came to keeping her home neat and tidy. She loved working in her yard and making sure her lawn was kept up just right. To say Clara loved to clean would be an understatement. After her husband retired, they traveled several winters to Hilton Head Island, visiting with her siblings and traveling all over the East coast. In 1967, Clara joined the Kalamazoo Figure Skating Club, taking lessons to learn how to dance on ice skates until 1969. In 2008, she moved in with her daughter on Pine Lake near Plainwell, Michigan, and lived there for ten years. In 2018 she then moved with her family to Grand Blanc. She loved being with her family, and she died surrounded by those who loved her dearly.

Clara leaves to cherish her memory her daughter, Judith Ann, and husband, John T. Hysell; brother, Edward V., and wife, Jean Genes; she had many grandpets; and several nieces, nephews, and friends.

Clara was preceded in death by her beloved husband of 61 years, Robert, parents, daughter, Julie Ann Jacko, and seven siblings.