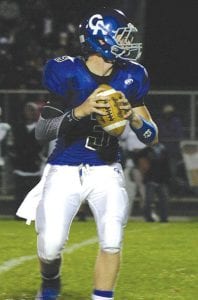 BURTON — The Game of the Year in Genesee County football has arrived this week, as fourth-ranked Carman-Ainsworth travels to No. 1 Flint Powers Catholic for a Saginaw Valley League-South Division showdown Friday night at Holy Redeemer Field.

The teams have matched 6-0 overall records and 3-0 marks in the Valley, dominating their new league after coming over together from the Big Nine Conference. Carman- Ainsworth won the final Big Nine title last season, beating Powers, 31- 26, in week four. But Powers went on to win the Div. 5 state championship.

Carman-Ainsworth racked up its fifth straight mercy-rule victory last Friday, 50-0 over Flint Northwestern, in a Valley game on homecoming night. Six different players scored touchdowns, as the Cavaliers built a 29-0 first-quarter lead and extended it to 43-0 by halftime.

For the third time this season, Carman-Ainsworth scored on its first play from scrimmage, as Demarion Allen ran it in from 34 yards just 1:45 into the game. The Cavs have scored on their first possession in every game this year.

Malik Seales made it 15-0 on a 22- yard run followed by Allen’s twopoint conversion pass to Jaylen Bradley at the 8:13 mark.

Seconds later, Northwestern coughed up the ball on its first play from scrimmage, and Jevonte Alexander picked up a loose ball and took it to the Wildcats’ 11-yard line. Carman-Ainsworth cashed it in immediately, with Brandon Walker catching an 11-yard touchdown pass from Connor Storms at the 7:52 mark. Gerald Holmes capped the first-quarter scoring with a 37-yard touchdown run with 5:17 left in the period.

Watching tomorrow’s game with interest will be Davison, which is still in the Valley race at 3-1 after last week’s 42-28 loss to Powers. The Cardinals are pulling for a Carman- Ainsworth victory because they could then share the title if they beat the Cavs on Oct. 19. Nobody else is in contention, with Flushing at 2-2, Southwestern Academy at 1-2, Northern at 0-3 and Northwestern at 0-4.