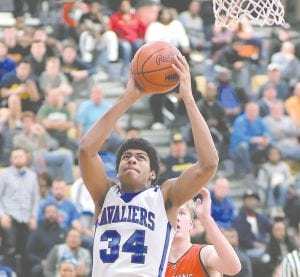 Carman-Ainsworth’s Michael Fletcher goes up for the uncontested basket against Flushing during the district opener on March 6.

St. Johns defeated host Owosso (6-15) in the other semifinal game with a 57-44 victory. In the only opening round of the district, held last Monday, Carman- Ainsworth lost a tough game to eventual champion Flushing, 39-36.

Flushing moved on to face Saginaw (20- 4) in the opening round of regional play at Mt. Pleasant on Monday, losing 56-52.

Carman-Ainsworth finished its season undefeated in league play at 10-0 with a 19-2 overall record for the season. — A.V.