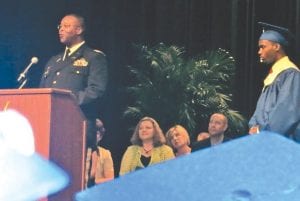 Aaron DuPree received a U.S. Naval Academy Scholarship valued at more than $400,000. The award is being presented by his mentor, Col. James Ramsey, Admissions Field Officer for the United States Military Academy at West Point, N.Y., for Michigan Congressional Districts 50 and 10.

FLINT TWP. — The Carman- Ainsworth Class of 2013 is one of the smallest but still managed to win $2,809,662 in scholarship awards, said CAHS principal Rory Mattar in opening remarks at the annual Honors Program Thursday recognizing top graduating students.

Among them was Aaron DuPree, who was recognized by Mattar as one of only two percent of Boy Scouts to earn the Eagle Scout Award. As his service project for a non-profit, DuPree created a children’s library at Mt. Olive Baptist Church.

DuPree was also presented with a Certificate of Appointment to attend the U.S. Naval Academy in Annapolis, Maryland. The appointment, valued at more than $400,000, is the equivalent of a four-year scholarship that include room and board, medical and dental coverage and a stipend, said Col. James Ramsey, Admissions Field Officer for the United States MilitaryAcademy at West Point for Michigan Congressional Districts 05 and 10, who presented the award. 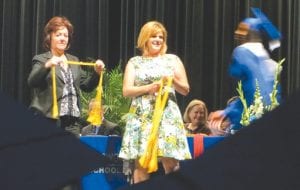 Forty-three students with grade point averages of 3.5 or higher were presented gold honor cords on stage.

Mattar said the Honors Program is one of his favorite events of the school year because it recognizes students who have taken full advantage of the opportunities given to them. He applauded parental support as part of their success story.

The graduates are the product of the hard work put in by educators, said Superintendent Steve Tunnicliff, who presented several awards.

On behalf of the Genesee Valley Rotary Club, he presented a $1,000 Student of the Year Scholarship to Allia Howard, the 2013 Class President.

He also recognized Whitney Reynolds, a student representative on the C-A board of education for the past two years, a commitment that requires attending meetings two evenings a month while other students are out doing fun things like attending sporting events, he said.

Next he presented five students receiving the ACT Excellence Award that was initiated last year. It goes to students who finished in the top ten percent nationally in ACT scoring. Those CA students are John Collins Jr., Mara Johnson, Logan Tynes, Nusayba Tabbah and Dean Smith. 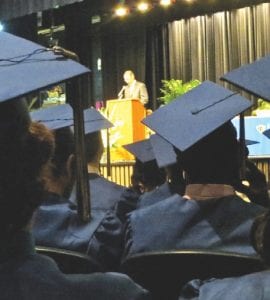