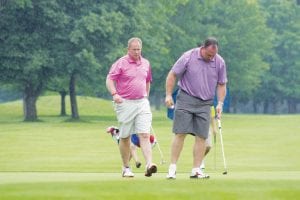 Golfers took to the course at King Par in Flushing, June 23, for a golf classic to benefit various Genesee County charities. In three years the event has raised more than $120,000 for those charities, including the Flint Junior Golf Association.

FLINT — The King Par Classic held on June 23 at The Flint Golf Club was a show of deeply compassionate charitable support for the younger generation of area golfers.

A large amount of socially conscious residents and advocates of the area came out to raise charitable funds for the Flint Junior Golf Association at one of the premier yearly events in the county.

They were there with smiles on their faces to keep the best of Flint alive and winning.

“Making a difference in our children’s lives is what the King Par Classic is all about,” said Ryan Coffell, King Par CFO.

Those who were played for may soon comprise the next group of highly influential, talented, and civic-minded citizens in the prestigious history of stand-out individuals in the county, like the numerous present on the rain-sprinkled green this past Monday afternoon.

Coffell spoke highly of the many involved in the event who strive to make each benefit for charity one with intense purpose and lasting integrity. 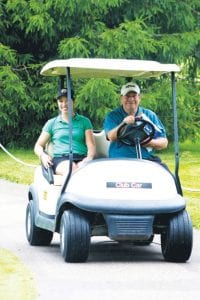 “Jon Runyan in King Par made it a point that we aren’t going to let anyone be invisible in this community. He wants this event to leave an imprint. If not for him, we wouldn’t have this,” said Coffell.

King Par under the sincerely executed leadership of Coffell, believe the work they do for charity in this area, and for this sport will impact the emotional and physical lives of future soon-to-be adults in the community.

“The King Par Golf Classic provides the funding to help us keep fees to a minimum for kids, no matter their financial situation. It not only helps support FJGA this year, but allows children to benefit in later years with scholarship programs and other teaching clinics,” said Lloyd Walter of the Flint Junior Golf Association.

Providing opportunities and fresh experiences that also result in new positive friendships, will in the King Par Classic vision hopefully lend to a healthy future for each teen impacted by their charity events.

It also holds promise in the ongoing sense of giving back, and by doing so strengthening community and making a bond of united citizens with a passion to reach their individual greatness, while respecting and seeing the same in friends and peers in the community.

“In three years, we have raised over $120,000 for local charities. For us it is an honor to be involved in such a way, and so much in the community,” said Coffell.