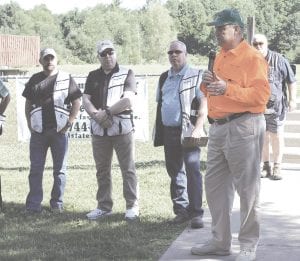 The Gleason Community Foundation held its first Clay Shoot to raise money for organ donation awareness, June 15. The event, held at the Grand Blanc Huntsman Club, 9046 Irish Rd., drew 94 shooters and there were many sponsors and volunteers. Special guests were Gretchen Whitmer, Democratic candidate for governor, and Secretary of State Ruth Johnson. The winner of the shoot was Larry Dawson, who shot a 48. First place was decided by the long run (who went the longest from the start without missing). Second place was Greg Longsberry, who shot 48. The Gleason Community Foundation is a non-profit organization led by Genesee County Clerk John Gleason (pictured above addressing the crowd) to raise money for organ donation. Funds raised will go toward next year’s scholarship given to an aspiring medical student in Genesee County.