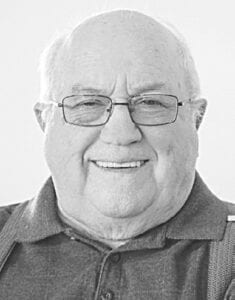 CLAYTON R. OTIS, 89, of Goodrich, passed away on Friday, April 2, 2021. He was born on July 20, 1931 to parents, Morris and Mable (Johnson) Otis, in Coldwater, MI. Clayton graduated from Coldwater High School in 1950. He graduated from Clearly College (Ypsilanti, MI) with a Bachelor of Science degree in Accounting on June 19, 1954. Clayton was selected by the faculty to receive the Arthur E. Summerfield Award of Merit for his outstanding record of scholarship, extracurricular activities, personality, and leadership. He was also named the Outstanding Graduate of his class. While attending Cleary, Clayton was an active member and leader of the 4-H club. One of Clayton’s biggest passions was roller skating. He was an avid roller skater with skills that brought him several awards over the years. In proficiency competition at the Imperial Roller Rink in Ypsilanti, Clayton received two medals for his excellence in skating.

Clayton was no stranger to community service. His work in youth, religious, and civic organizations brought him both state and national recognition over the years. He was the treasurer of the Mt. Pleasant Boys Club, and a member of the Steering Committee. During his time as the treasurer, Clayton hosted a benefit skating party in July 1961, where he conducted a skating clinic and all proceeds went to the local Boys’ Club Chapter.

Clayton was active in the work of the Jaycees both in Mt. Pleasant and in Ypsilanti and a recipient of the United States Junior Chamber of Commerce “Spark Plug” award. While a member of the Ypsilanti Jaycees he served as vice-president, director and editor of the club paper. He also received an appreciation award for this work on behalf of the Ypsilanti Boys Club. In September 1961, Clayton, a member of the Sullivan & Page accounting firm, was named Finance Chairman of the 1961 Isabella County United Fund campaign.

He married Barbara (Conlen) Otis June 26, 1965 at St. Stephens Catholic Church in Port Huron. She preceded him in death on January 24, 2018. He was a resident of Goodrich for over 50 years, and he was a devout Catholic. He and Barb attended Holy Family Catholic church until the founding of St. Mark’s in Goodrich. They raised their family at St. Mark’s and then returned as members of Holy Family in Grand Blanc for the remainder of his life.

As an accountant, Clayton spent most of his career as the Treasurer and Director, for Guardian Mortgage Company in Grand Blanc, MI. He retired from Guardian Mortgage on October 12, 2005 after 36 years of service. In addition to his day job as an accountant, Clayton owned and operated Otis Acres greenhouse and vegetable farm. Clayton loved nothing more than spending time outside in his garden or in the greenhouses. The nursery and farm was in operation for over 40 years. Although he loved farming, it gave him great pleasure to provide summer jobs for the neighborhood kids over the years. All his workers were very special to him and he kept in touch with many of them until his final days.

Clayton absolutely loved children. In addition to his own children and grandchildren, he enjoyed spending time with all of his neighborhood “kids.” Most recently, he had some of his happiest moments with his caregiver’s children.

A special thanks to caregivers, Lindsey DeWitt and Samantha Barden, for the amazing care they provided to Clayton throughout his final months.

Fond memories may be offered the family via the online guestbook at www.HillFH.com