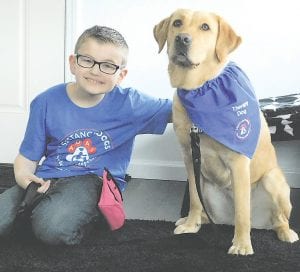 CLAYTON TOWNSHIP — Layne Schaefer is a typical 8-year-old boy who likes to ride his bike, tinker in the STEM lab at school, watch Youtube videos, and snuggle. His favorite food is pepperoni pizza.

The Dieck Elementary School 2nd grader experiences all the ordinary childhood events in an extraordinary way because he has autism. And now, he has a BFF – best furry friend – to help him navigate the peaks and valleys along the way.

“She’s bringing him out of his shell, already,” Greg said.

Living with autism brings many challenges. For the Schaefers, that began when Layne was about 2 years old when doctors first suspected autism.

“For any family, there is a grieving period,” Michelle said.

“And a denial period,” added Greg.

“You grieve for the uncertainty,” Michelle said. “You wonder how severe it is. Will he have friends? Will he be able to be independent? Go to school? It seems so silly looking back now.”

In those early years, the Schaefers received much unsolicited advice from well-meaning people.

“Everyone is an expert,” Greg said. “We accepted the diagnosis. That was the first hurdle. We trusted the doctors and followed their advice. Everybody has problems. We accepted it early and adapted.”

The wait list for medical testing is long, Michelle said, so even though Layne had undergone cognitive and psychological evaluations, it wasn’t until about two years ago that the Schaefers finally received the medical diagnosis, which opened up more opportunities for treatment, including qualifying for a therapy dog.

“His primary care physician suggested that a dog could help Layne come out of his shell, talk more and become more assertive,” Michelle said. “The psychologist also asked if we’d considered it.”

But the Schaefers knew it would be a big commitment.

“When you have a child with autism, you wonder, ‘Do I really need to take on something else?’” said Michelle.

Waiting for the right dog was tough. The family made several trips to Ohio to test with different dogs to find the perfect match for Layne’s activity level, disposition and needs. In early February, trainers determined that London would be a good match.

“He took to her right away,” Greg said.

Layne comforted London on the ride home, which came as no surprise to Greg and Michelle since their son has always shown a remarkable capacity for compassion.

Within days, they could already see a change in Layne.

“For five years, he slept in our room because of separation anxiety,” Michelle said.

Since London joined the family, Layne has been content to sleep in his own room with his dog at his side. He’s also learning responsibility through caring for London, making sure she’s fed and has plenty of opportunities to play fetch and enjoy belly rubs.

Mom and dad do, too.

“She’s got me wrapped around her finger,” Greg noted.

Michelle said she hopes more people will try to learn and understand more about autism.

“Autistic people are normal, they just experience the world in different ways,” she said. “They’re sweet and loving, and they have a lot to offer.”