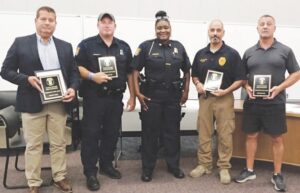 CLAYTON TWP. — Four Clayton Township Police officers received recognition for their efforts in solving a couple of high-profile cases in 2019.

Three of the officers – Detective Ken Engel, Officer Richard Lee and Officer Rod Wurtz – were honored for their work in solving Kevin Bacon homicide that gained national attention for its gruesome details.

“Detective Engel was instrumental in closing out the case,” said Detective Sgt. Troy Belanger. “Without his efforts, Mark Latunski would have had ample time to cover up his crime.”

“In the beginning, we believed Kevin Bacon committed suicide,” said Belanger. “After the investigation switched to a possible abduction, Officer Lee was handed the case, almost in the middle of the night, and determined Mark Latunski’s location.”

Lee and Wurtz made contact with Latunski at his home in Shiawassee County, Belanger said. Latunski gave the officers permission to enter and search the residence.

“We believe Mark Latunski thought he could outsmart the police,” Belanger explained.

Wurtz kept a close watch on Latunski, monitoring his behavior, while Lee searched and ultimately discovered the hidden room in Latunski’s basement where he found Bacon’s remains.

Belanger also was honored for his work in stopping a string of break-ins in the summer of 2019. The break-ins occurred at homes in the northern part of the township, said police Chief Charlotte Brown.

Belanger identified Christopher J. Love as the suspect, determined where he lived and was able to place a tracking device on his vehicle.

As a result, a few days later, Love was arrested while committing another break-in in the township. Love has an extensive record and was on parole at the time of his arrest.