Cleaning up after the flood 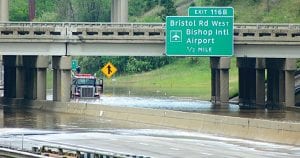 This semi-tractor trailer was stranded on I-75 following the May 4 storm and flooding.

FLINT TWP. — In the wake of widespread flooding after a record rainfall on May 3, most of the township board meeting Monday night was spent answering questions from affected parties.

Wright said 9 1/2 inches of rain fell in five hours which climatologists are calling a “500-year event’’ rarely seen more than once in a lifetime. Local drainage systems, built to handle no more than a 25-year event, simply did not have the capacity to handle that much water, Wright said, while refuting claims that blame blocked drainage systems.

“Even if these drains were 100 percent slick clean, (the heavy rainfall) would still have done the same damage,’’ he said, adding that a drain big enough to handle a 500-year event can be built but would be cost prohibitive.

Clayton and Flint townships were hardest hit by flooding, he said.

Township Supervisor Karyn Miller, who declared a state of emergency, provided copies of a letter sent to county emergency management coordinator Jennifer Boyer in the Sheriff’s Department, initiating a request for state or federal assistance.

In her letter, Miller described the emergency situations taxing police and fire manpower, the closing of I-69 and I-75 freeways and some primary roads, and demand for Consumer’s Energy crews called in remedy downed utility lines and fallen trees.

“We have had severe flooding in many residential areas, leaving hundreds of basements with several feel of standing water in them,’’ she said.

Miller stressed that there is no public assistance available for resi- dents nor the promise of any. Those with flooding issues have little recourse except homeowners insurance policies, providing those include flood coverage.

The business district also experienced serious flooding. A section of Miller Road just east of I-75 was underwater for several hours Friday morning and guests staying at the Super 8 Hotel on Claude Avenue were stranded until mid-afternoon by flooding that blocked off parking lot exits.

Police tape blocked off Ballenger Highway south of Miller because the road was impassable. And the Flint River overflowed flooding Mill Road off Flushing Road,

Contrary to media reports of raw sewage being dumped into the Flint River, the overflow discharged is dosed with chlorine bleach and usually cleaner or as clean as water already in the river, he said.

“I just want to allay public concerns that what the treatment plant does under storm conditions harms the river,” he said.

He also took questions about residents experiencing foul-smelling water backing up in basements.

Township Clerk Kim Courts said what she saw in the basements of homes in her neighborhood looked like black sludge.

Case said the treatment plant serves the city of Flint and parts of Beecher but not outlying areas. He explained that homes built before the 1960s have footing drains that tie directly into the sanitary sewer system.

Sen. Gleason encouraged the township not to give up seeking state and federal help. Statistical data of flood damages can be used to document the need to remedy trouble spots, he said.