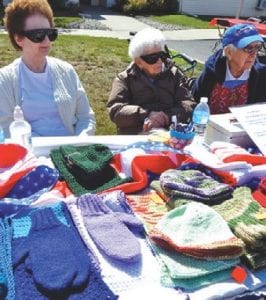 The Sit-and-Stitch Group, a club of resident knitters at Woodhaven senior community, sold and raffled off their wares during the annual Fall Fest celebration.

FLINT TWP. — For the 24th year, the Woodhaven Senior Community pitched tents in its parking lot to host a Fall Fest for its residents at their families. Rain was in the forecast but clear skies and warm temperatures prevailed for the outdoor celebration.

Each year brings a different theme and activities for the half-day event.

“Today we had a red, white and blue Fall Fest honoring our residents who are military veterans and active military around the world serving our country,” said David Dixner, Woodhaven owner and executive director.

The program included a Color Guard presentation by Veterans of Foreign Affairs and raising a flag up a new flag pole. The flag was a ceremonial flag in honor of the deceased son of one of Woodhaven’s residents, Dixner said.

Hamburgers, hot-dogs and other traditional American foods were served picnic style, a DJ provided music and events for children were provided. 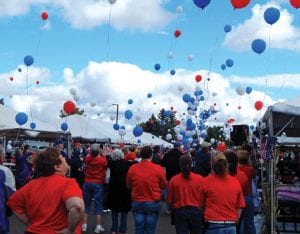 A balloon release is a tradition at Woodhaven’s annual Fall Fest celebration for residents and their families.

In keeping with tradition, gatherers were given red, white and blue balloons to release during the traditional balloon release at the end of the event.

Sam Club, Annie’s Pretzels and Tropical Smoothie were among local businesses supporting the event by providing food or beverages.

Two Woodhaven residents groups, the Woodcarvers and Sit-and-Stitch sold their wares. The Sit and Stitch group uses proceeds to buy more yarn which is then used to make items that are donated to the Cross-Over organization and to the Salvation Army to be given to disadvantaged people to help them keep warm during winter.

With an emphasis on wellness, a McLaren health care team was also on hand to dispense information in an activity tent.