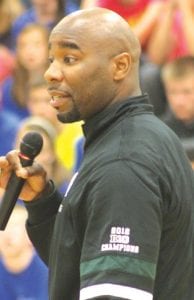 Mateen Cleaves tells students at Davison’s Hahn Intermediate School to make the most of their education.

DAVISON — No matter how good they are in sports, students should make sure they get a good education in school along the way, says Mateen Cleaves.

The former Flint Northern High and Michigan State University basketball star made that point clear during a 15- minute speech to a gym full of Hahn Intermediate School students on June 1. The students were gathered for a pep rally in preparation for a key, year-ending test they were about to take.

Cleaves, who was drafted by the Detroit Pistons and played briefly in the NBA, made three points during his talk. He told the kids to make the most of school, dream big and work hard.

Cleaves led MSU to a national championship in 2000 and was selected by the Pistons with 14th overall pick in the first round of the NBA Draft that year. The 6-foot-2 point guard played onand off in the NBA from 2000-06 with Detroit, the Sacramento Kings, Cleveland Cavaliers and Seattle SuperSonics, averaging 3.6 points and 1.9 assists in 167 career games.

He also played with three teams in the NBA Development League from 2003-09, then switched to a broadcasting career in 2009. He has worked as a studio analyst for Detroit Pistons games on Fox Sports Detroit and CBS Sports.

Now 34, Cleaves said he has had to work hard in his new career, learning how to speak clearly for television and doing his homework on players and statistics for his analysis. He has also worked as a guest commentator for ESPN, Big Ten Network and NBA TV.

In his spare time, he returns to the area to speak to student groups, at basketball camps in Lapeer and Genesee counties and other groups where kids are the emphasis.