Clemons announces candidacy for Genesee County Board of Commissioners 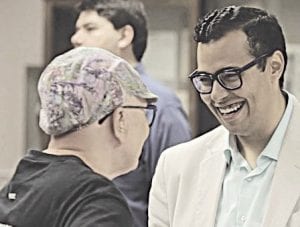 County Commissioner Kim Courts has held the District 4 seat since she was first elected to the office in 2016. Courts has not announced whether she plans to run for re-election. The district covers Flint Township and parts of Flint. The primary election will be held Aug. 4, 2020.

Clemons grew up in Flint and is active in the local Democratic party, staffing several campaigns in the area and acting as co-chair of the Genesee Democratic Party social committee and treasurer of the Genesee County Young Democrats. He currently works as legislative director to state Rep. Alex Garza, D-Taylor, leading policy initiatives for Taylor and managing his legislative office.

“I grew up here in Flint, and I’ve seen a lot of changes happening, some for the good and some not so much” Clemons said. “I think at the county level there’s been a lack of interest, both in people running and from voters as well. People tend to focus on the state and national level and even down to the city council level. Sometimes the county gets forgotten, and that’s where some of the most important work that affects people happens. There’s not enough emphasis on county services and county government.”

Clemons, 26, is one of the youngest candidates to run for county commissioner in Genesee County. He said one of the reasons he is running is to encourage more young people to run for office and to vote. He became interested in politics at a young age and began working on campaigns while he was a student at Flint Southwestern High School. He graduated from Michigan State University with a degree in public policy and earned a master’s degree in political management from George Washington University.

Clemons said he’s had conversations with people in the Genesee County Democratic Party and local elected officials about running for office and has received a lot of encouragement and support. He sees three major issues he would like to address during his campaign.

“First is the economy,” he said. “We’ve seen in Genesee County, and specifically in Flint and Flint Township, a standstill in economic growth. We need new and innovative ways to bring new jobs and new industry and make people want to be part of the community. Second, the county has got to protect the pensions and healthcare of retirees. There are a lot of issues at the county level about how to fix the budget to make sure we protect health benefits for county workers and retirees. And, of course, we need to take care of the ongoing water crisis and look at partnerships and cooperation for the county to do their fair share in supporting the fix.”

Clemons said he plans to run a grassroots campaign, including knocking on doors to talk with residents, holding forums and town hall meetings, attending community events and possibly debating opponents. He said he knows the positive and negative impact elected officials can have, and he wants the opportunity to share his vision with people and to hear from them what he can do to move the community forward.

Clemons, who will be 27 in December, said he has been told there is a pecking order in politics and that younger people should wait their turn to run for office.

“It’s something that we hear often, time and time again,” he said. “I don’t necessarily subscribe to that ‘wait-your-turn’ mentality. Waiting has gotten us five years without clean water. Waiting has given us one of the highest crime rates in the state. Waiting has gotten us people who are interested in protecting their titles more than healthcare. Our community can’t afford for us to wait any longer.”

For more information about Clemons and his campaign, visit www.voteclemons.com.