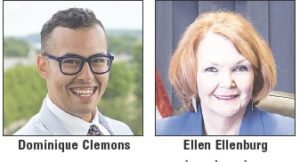 FLINT — District 4 Commissioner Domonique Clemons (D-Flint Township) will serve as the Genesee County Board Chairman for 2022.

Clemons, who was elected to the county board in 2020 and served as vice chair in 2021, was appointed by a 5-2 vote at the county board’s Jan. 5 meeting. He will fill the chairperson position previously held by District 5 Commissioner Mark Young, who resigned from office last month.

Clemons said that he’s looking forward to taking on a new role with the county board and urged his colleagues to work together with civility and respect during the New Year to usher in productive change for Genesee County.

“We all know that there is no easy task ahead of us this year, and we have many challenging decisions that will be coming before us,” he said. “I would ask that each of us come into every conversation we have this year with a willingness to listen and an appetite to do good for our community. The phrase ‘That’s the way it’s always been’ is no longer an acceptable answer here in Genesee County.”

Clemons attended Flint Southwestern High School and holds a public policy degree from Michigan State University, as well as a Master’s in Political Management from The George Washington University. He serves as Director of Diversity and Staff Development for the Democratic Caucus of the Michigan House of Representatives and as treasurer for the Genesee County Democratic Party.

Clemons also has several years of government and advocacy experience, previously serving as chief of staff for state Rep. Alex Garza, a strategy assistant for the Michigan College Access Network, a regional organizing director for the Hillary Clinton Presidential Campaign in 2016 and a communications specialist in the Michigan Senate.

As the new chairperson, Clemons announced the leadership team for the following committees:

District 3 Commissioner Ellen Ellenburg (D-Burton) was also selected to serve as vice chair for the county board.

Prior to being elected to the county board in 2016, Ellenburg served for nine years on the Burton City Council. As a city council member, she held titles of legislative chair, representative for Metropolitan Alliance and the liaison for Burton Libraries. She was also a Public Access committee member, a Planning Commission member and a member of the Burton Police Millage Committee.

Ellenburg has also been a longtime Burton Chamber of Commerce board member, a Goyette “Heats-On” Program Committee member, past member of the Burton Rotary, a FOP member, vice chair for the Democratic Party and a Platinum Level National League of Cities member.