Clerk under investigation for allegedly performing an illegal marriage 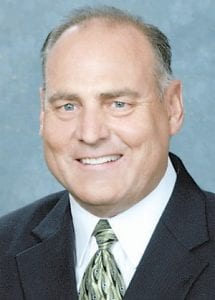 GENESEE COUNTY — Genesee County is investigating allegations that Genesee County Clerk John Gleason performed an illegal marriage outside the county and pressured his staff to backdate the license.

On Dec. 24, Gleason married a couple at Owosso Memorial Hospital in Shiawassee County, which is outside his jurisdiction. Gleason said he was approached by a leader in the local immigrant community to perform a wedding for a couple in a neighboring county who was about to give birth to their child.

“I was scheduled to marry them on Dec. 26 at noon in Genesee County, and I believed they had already secured the license,” he said. “When I arrived, I asked where the marriage documents were. They told me in a rush to get to the hospital in an ambulance, (and) they left the documents at home. The baby was due Jan. 13 and came three weeks early.”

As a result, Gleason said that he had to perform an emergency ceremony without a license before the birth of the couple’s child.

Gleason said that while Shiawassee County Clerk Caroline Wilson gave verbal consent for the wedding to be performed, she did not issue a written permission or an official marriage license for the couple.

Because he did not obtain written consent to perform the wedding, Gleason could be found guilty of a misdemeanor under Michigan law.

However, Gleason said he learned Michigan has a Secret Marriage law, which allows couples to get married without publishing notice of their wedding.

According to state law, secret marriages can be performed “when a person desires to keep the exact date of his or her marriage to a person of the opposite sex a secret, the judge of probate may issue, without publicity, a marriage license to any person making application, under oath, if there is good reason expressed in the application and determined to be sufficient by the judge of probate.”

Gleason said he worked with the Shiawassee probate court to complete the process and finalize it as a secret marriage. He said that the judge certified the marriage on Feb. 19.

One month after the wedding, Gleason is alleged to have pressured members of his staff to validate the wedding and have the forms backdated. Staff members then accused him of harassment after they didn’t comply with his request.

“As it relates to this specific marriage, the wedding was performed on Christmas Eve,” Gleason said. “Nothing was open, not even the government. That is why I asked for the license to be backdated, which also is not uncommon given the circumstances.”

Other written statements from the county’s probate office have stated that Gleason approached probate court staff about backdating the marriage license. When the probate court did not comply with his request, Gleason is alleged to have directed “misogynistic and condescending” remarks to women on the staff.

Gleason said he did not pressure any staff members to backdate the license. He also said that he only approached the probate court to see if backdating was an option for helping to get the couple their marriage license.

“(At that time), Shiawassee County would not release the marriage license,” he said. “So, I tried to figure out how to get their license for the couple and started asking around. I asked people in my office and in the courts. I never asked anyone to do anything illegal.

“Perhaps I just did not do a good job explaining what I was asking for and why,” Gleason continued. “If I put someone in an uncomfortable position or said something offensive, I am sorry.”

Gleason, who has served as the clerk-register since 2012, said he has reached out to State Rep. Tim Sneller to introduce legislation that would allow clerks to perform emergency weddings without a license in certain circumstances.

Meanwhile, the Genesee County Board of Commissioners issued this statement about the investigation:

“Genesee County is using an independent investigator to review the alleged allegations made by employees in regard to the Genesee County Clerk. We will have no further comment in this manner until this investigation is complete.”