Clinton fires up local Dems to get out the vote 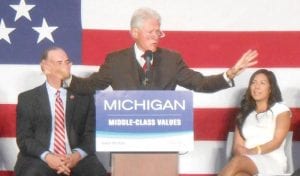 PREACHING TO THE SAVED – Is what Bill Clinton said to the audience, in remarks promoting the democratic ticket in Michigan during his Oct. 22 appearance in Flint. From left: Congressman Dan Kildee, former President Bill Clinton, and Senate Candidate Vanessa Guerra (Saginaw).

FLINT — “Wherever people treat each other right…where they recognize their special individuality but embrace our common humanity, wherever people have honest and open disagreement for the purpose of reaching the best decision and they work together, good things are happening,” former President Bill Clinton said Oct. 22 in Flint.

He called out for people to work with America’s natural diversity including the “bedrock African American community” in Flint, as well as other races, and included “grey-haired white Irish Americans”, which received a chuckle.

“There are mountains of research… which show diverse groups make the best decisions,” Clinton added. “It only works if you believe in empowering should have opportunity.

He claimed the Koch brothers “put so much money in and try to stop everybody from thinking” during the election and stated Washington gridlock was because there was not a good voter turnout in mid-term elections.

“We have deeply divided and conflict ridden politics because two different Americas show up at the presidential election versus the mid-term election,” said Clinton.

He called for a middle class out economy versus a trickle down economic policy.

Possibly referring to this chart (www.whitehouse.gov/blog/2014/08/21/ chart-week-auto-production-its-highest rate-2002), Clinton stated there are 700,000 more manufacturing jobs in the auto industry than at the beginning of the 2008 recession.

He said the conservative, far right wing was at least “…consistent…and totally impervious to evidence,” in regard to raising the minimum wage; accusing them of “singing the same old song” about how tough it would be for small business, which he challenged.

“Not only would the people who get a raise be helped, but there would be millions of your fellow Americans who would get their pay increased…and go right out and spend all that money,” Clinton claimed. This would increase income to small businesses and the manufacturers who supply them as well as growing the economy he explained.

“This is not rocket science,” he exclaimed over this and other points in his speech. He also called for gender equality in pay which he said would make the country wealthier and make families stronger.

“Who are we kidding?” Clinton asked. “This is about whether we’re going to go forward together.”

Sen. Gretchen Whitmer of Ingham County, stated “What we need is opportunity. And opportunity comes with…a good education and a fair wage.”

Grand Blanc resident Mike Behm who is running for the University Of Michigan Board Of Regents, also spoke, relaying his belief that Flint is a key economic driver for the university and pledged to be the region’s voice on the board and fight for affordability in student’s education.

Sen. Deb Stabenow, not up for re-election, stumped for candidate Gary Peters and the mid-term vote as well.

Stabenow also spoke on the minimum wage, stating it was not fair people working 40 hours a week live in poverty.

Freshman Congressman Dan Kildee was introduced by 25-year-old Bridgeport native Vanessa Guerra, who is running to represent Michigan’s 95th House District in Saginaw. Kildee stated that even though minimum wage failed to make to the ballot in ink, a vote for the democratic ticket would put it on the ballot in theory.

Tammy Allen, chairwoman of the Genesee County Republican Party, said it appeared to her, from published pictures, everyone in line for the Clinton event was well dressed and did not seem hurt by “this failing economy.”

“Unlike if you go a couple blocks over to the rest of Flint where our residents are suffering greatly,” she said.

Allen said Clinton used his star power to steady Obama’s re-election in 2012 when he was losing to Mitt Romney. Clinton said then, that Obama had four years and needed another four to turn things around.

“Clinton was wrong then- and he’s wrong now,” she said. “Even Democrats are walking out of Obama meetings across the nation and his mismanagement of this country’s critical issues ranging from: unemployment to ISIS, Ebola to Obamacare. Bringing the “Celebrity in Chief Clinton” is not going to change these facts.”

Over the last six years, Allen said Obama, along with Peters and Kildee, have focused on building “a forced socialist healthcare system” rather than focus on improving the economy.

“I personally believe President Obama is the worst President in our U.S. history and is again stooping to low levels by using ex-President Clinton who greatly embarrassed our nation with his misrepresentations and lies while he was in office,” said Allen.