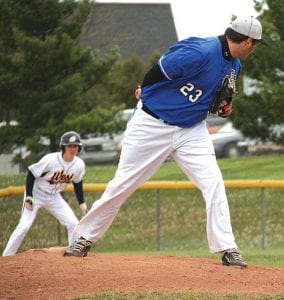 Carman-Ainsworth’s Ethan Lambitz checks the runner against West in May.

CLIO — Host Clio, 4-10 on the season, served notice to everyone in the No. 3-1 baseball district by routing Flint Northern, winless on the season, 16-0, in the pre-district game Tuesday.

Swartz Creek, 7-9 Metro, drew Flushing, 6-4 Big Nine for the semifinals at noon on Saturday, while Carman-Ainsworth awaited the outcome of the Clio vs Northern game. The Cavs and Clio will do battle at 10 a.m. on Saturday. The finals take place at 2 p.m. Swartz Creek and Flushing are favored to meet in the finals, but nothing is certain come playoff time.