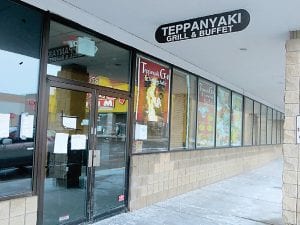 Several notices were posted on the closed doors of Teppanyaki Grill & Buffet by groups that regularly met there, to direct members to an alternate meeting place.

FLINT TWP. — For the second time in less than 24 months, the buffet restaurant at 3583 Miller Rd. in the Genesee Crossings shopping center has abruptly closed its doors — apparently for good.

Signs posted on the door at Teppanyaki Grill & Supreme Buffet date back to mid-December when groups holding regular meetings there had to direct their membership to other accommodations.

One of them was the West Flint Business Association which had to relocate its usually well-attended annual gift-drawing fundraiser on Dec. 11. Members arrived to find the restaurant closed, according to the posted notice. Apparently they were not notified about the restaurant closing.

It’s the second time the WFBA has lost its longtime meeting space of many years. The first shutout was in early January 2012 when the former Old Country Buffet closed permanently after some 20 years of operation, as a result of a chain-wide bankruptcy restructuring by Minnesotabased Buffets Inc. 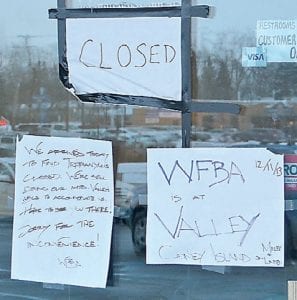 The 10,450 square-foot vacancy did not sit for long. Teppanyaki cleared site plans with the township Planning Commission in late spring of 2012 and after making extensive interior renovations, opened in mid-summer.

The WFBA was among groups that returned to its longtime meeting space when Teppanyaki opened. The group met at two other locations for a few months in the interim.

The listed telephone number for Teppanyaki has been disconnected and owners could not be reached for comment.