Offers praise for Hurley Trauma Center for saving his life 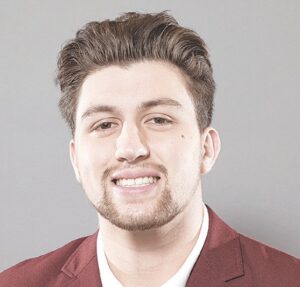 FLINT — John Keller, quarterback for the Central Michigan University football team, said he doesn’t remember much from the night he was shot in the chest back in April at a party in Mount Pleasant.

Keller, 21, said what he does know about that night is if it hadn’t of been for the Hurley Trauma Center in Flint, he wouldn’t likely be here today to tell his story.

Still on the mend from the near-fatal shooting, Keller spoke to the media Aug. 25 to not only talk about his story, but to sing the praises of Hurley being the only level 1 trauma center serving mid-Michigan, northern Michigan and the Thumb.

“What I went through was something I never expected I’d have to go through myself,” said the Ohio-native. “When you’re going through life you never expect something like this to happen to you. When it happened it really changed my life and gave me a new perspective, because after this I seen things and went through things not a lot of people do.”

Keller said he was wrapping up spring football, the result of delays in the fall 2020 season due to COVID- 19, and he was looking forward to summer.

After leaving what was the final game of the spring season, Keller said he and friends decided they were going to have a party to celebrate before everyone went home for the summer. They went to an off-campus apartment complex in Mount Pleasant where they had friends and the party took place there.

He said they had a party and things were fun for a while, but as the hour grew late people showed up to the party who Keller said weren’t supposed to be there. Things began to get out of hand, he said and the group that arrived late was asked to leave.

“Then they decided to come back and they brought guns,” he said, recalling the night. “They came in and they started to shoot. They shot me and one of my other friends as well.”

Keller described the weapons as semi-automatic firearms, including a Glock and an AR-15. He said he doesn’t really recall much after being shot in the chest, calling most of what came next as a blur.

“When something like this happens to you, something traumatic, you don’t feel it,” he said. “When it happened, everything in a split second just changed. I dropped and that was that.”

Emergency first responders arrived and treated Keller at the scene before transporting him to a local hospital where he was stabilized. From there, he was flown to Hurley Medical Center in Flint.

He said his recovery had been ongoing and he is still taking things one step at a time.

“Recovery has been a road,” said Keller. “I’ve been taking things real slow. When I was at the hospital, they were doing a really good job of taking care of me.”

Currently he is undergoing rehab and says he started out doing light walking on the treadmill and has been working back from there, taking things slow. He will not play football this season, but said he hopes to return – possibly next year – to resume is college football career.

Keller said he returned to the CMU campus last week and has resumed classes there this semester.

He said it has been nice to see all his friends again, as well as the other players and staff. All have been supportive in his struggles the past three months.

“When you go through something traumatic, if you look at it always in a negative way it makes it that much worse,” he said. “It just has more repercussions on your health.”

He said he wants to use this experience to show people you can make it through anything if you try.

The Isabella County Sheriff’s Office arrested Kenneth Thomas of Farmington Hills in connection with the shooting.

Keller said he is thankful for Hurley Trauma Center being so close to CMU and added there could have been a different outcome to his story if it wasn’t there.

“It’s amazing because it was an hour and a half away. That changed a lot of things,” he said. “If it was any further it might have changed everything.”

The 37th annual event is the main fundraiser supporting Hurley’s Trauma Center, making sure the hospital can provide the most cuttingedge technology to save lives.