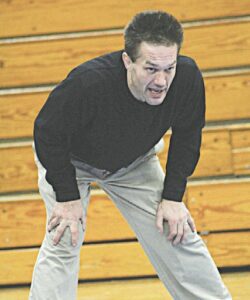 DAVISON — During his 26-year career with Davison Community Schools, Roy Hall has spent more than his fair share of time in the spotlight.

An inductee in the Michigan chapter of the National Wrestling Hall of Fame, Hall led Davison to seven state championships, six second place finishes to the state title and numerous individual state championships. Under his leadership, the program excelled to become one of the most respected high school wrestling programs in the country.

And while the accolades and recognition are well deserved, Hall has had a very hard time accepting them. To the outside, he’s a legendary coach. But what most don’t know is that Hall is extremely shy and an introvert. While some coaches are known for being loud and gruff, never would you find Hall yelling at his players, not even in the heat of a very competitive match.

Instead you could spot him on the sidelines sharing – not shouting – words of encouragement.

So, knowing Hall’s aversion to attention, it only made sense that he wanted to finish his last day teaching at Davison Community Schools without any fanfare.

Next week, Hall will begin his new job teaching health and physical education to middle and high school students at Kearsley Community Schools.

“I’ve led a fairytale life,” he said. “I’ve had unbelievable support from the administration, co-workers and the community. I will always be Davison and I will always carry this place with pride. They say you get to write one masterpiece and I did.”

Hall said he has three to four more years before retirement and while he will no doubt continue to mentor students, changing jobs is a way to slow down and enjoy some peace and quiet during this time in his life. But that doesn’t mean he will not be missed.

“Coach Hall has had a tremendous positive impact on the District and our students as both a teacher and a wrestling coach over the past 23 years,” said Superintendent Kevin Brown. “Roy put Davison on the map and built a wrestling dynasty that earned him well deserved recognition as one of the top high school wrestling coaches not only in the state but in the nation. I completely understand Roy’s desire to move on and support his decision but he will be sorely missed.”

Eric Lieske, former superintendent for Davison Community Schools, has known Hall since they were both in high school.

“Although we were not close back then, I truly appreciated our relationship when we reconnected as colleagues at the Davison Middle School when I served as the assistant principal and Roy was the P.E. teacher,” he said. “That started a long standing personal and professional relationship and I have always been amazed at the way he made connections with kids. I wish him all the best in his next role and know that he will be missed in Davison.”

Hall said his move to Kearsley is actually a return to his roots. He grew up in a trailer park near Averill Avenue and Davison Road on the east side of Flint. When his dad, a Vietnam veteran, and his mother divorced, Roy moved to the Bentley school district. He began wrestling around the age of 6 and discovered that he had a love for all sports.

Hall said his family was “poor as you can be” and at the age of 14, his aunt and uncle took him in. They lived within the Davison school district and Roy would soon find out how that move would change the trajectory of his life.

“The teachers took me in – I was like a mascot,” he said. “The respect they showed me was just tremendous.”

Hall was driven, determined and focused to seal his fate as a good student and an accomplished athlete. He played football and was on the first Davison team to make it to the state playoffs. During the time Hall wrestled as a Davison High School student from 1985 to 1988, twice he was named a Michigan High School Athletic Association state champion and was a member of the 1988 All-American Dream Team. Following graduation, Hall went on to wrestle at Michigan State University where he was a four-time Big Ten place winner and four-time NCAA qualifier. He also served as team captain for two seasons.

In 1990, Hall earned a bronze medal at the United States Olympic Festival.

“My mom knew that even at the age of 14 I had goals,” he said, adding that he had set his sights on competing in the Olympics after watching the 1980 games.

Once he graduated from college, Hall embarked on fulfilling his next vision: to return to Davison to teach and coach. He did just that and was hired as a teacher in 1995.

It was just two years later when he took over as Davison’s head wrestling coach. The Cardinals were in a bit of a dry spell and had not won a team state championship since his senior year. That changed quickly under Hall’s guidance as the team won the 2000 Division 1 championship before finishing second one year later.

And while Hall’s commute to work will now be a little longer, he said you will still see him around.

He and his wife, Jennifer, who recently retired from the district, will continue to keep ties with their friends and families in Davison. Their son, Chase, is also staying on as a coach with the wrestling team.

“I have literally had the opportunity to paint the masterpiece I have had in my head,” Hall said. “I will forever be grateful to the community and district for embracing me and putting their trust in me.”