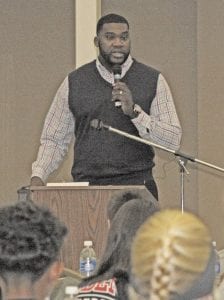 GRAND BLANC – It was an opportunity of a lifetime for several area students to gain many different perspectives on leadership last Wednesday at the Genesys Athletic Club in Grand Blanc. Some of the best coaches and athletes from around the Flint area showed up to mentor the group of young student athletes from 22 different high schools.

“Genesys Athletic Club has offered this program every year because leadership and sportsmanship are an integral part of an athlete’s life,” said Jim Mongrain, the operations manager at Genesys Athletic Club. “Our goal is to teach student athletes about leadership and sportsmanship on and off the field in order to build a strong framework of skills they can incorporate in all aspects of their life.

“Not just as a team leader, but as a classmate, friend, mentor and vital member of the community today and in the future. We are teaching them skills they can use for the rest of their life. And who better to teach these skills and serve as mentors than former athletes who are now community leaders.”

However, there was more to the program than mentoring the young athletes. The kids also got the chance to work out at the athletic club with personal trainers helping them along the way. Several drills were conducted, including speed, agility, power and endurance drills.

Before the program began, within the tennis dome of the Genesys Athletic Club, many were in awe and stopped to take pictures with Gray as they remembered his days going to the Final Four with the Spartans. Gray was a high school All-American at Flint Beecher before his days in East Lansing and has now returned home as the after school activities coordinator at Beecher.