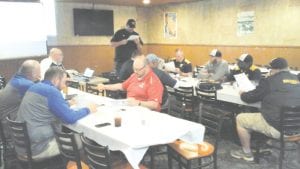 Altogether, 79 seniors from over 20 high schools across mid-Michigan were selected to play for Team Rise and Team Grind. Among the most heavily represented programs were Davison, Grand Blanc, Carman-Ainsworth and Lake Fenton.

Lake Fenton’s Eric Doyle will coach Team Rise alongside Joe Spencer from Swartz Creek. They will square off with Team Grind’s co-head coaches: Jerry Parker from Carman-Ainsworth and Jason Beverly from Burton Bendle.

Kickoff for the All-Star game is set for 7 p.m. on June 9 at Kettering University’s Atwood Stadium. It’s the first time Flint’s historic stadium will host the game, which was held the first two years at Davison High School’s Cardinal Stadium.

“We’re happy that the people at Kettering University agreed to host the game,” said Jake Weingartz, Davison’s new varsity football coach. “It gives seniors one more time to strap up, have a week of practice and play in front of a really good crowd.”

“I am very excited to be involved with the Flint Area ASG,” said Spencer. “I consider it a great honor to work with the best seniors from the area, and some great coaches as well. I think being selected for such an exciting event is a credit to the Swartz Creek coaching staff and our program. I am so thankful to Kettering’s Atwood Stadium for hosting us. I cant wait to get to work and make some new relationships through the great game football.”

Weingartz, who’s helping to organize the event, said that fans will get to see a high level of talent on display, while also enjoying a rarity: football in June.

This year’s honorary captain for the all-star game is Jake Long, a Lapeer East graduate and the No. 1 overall pick in the 2008 NFL Draft. Long is also partnering with the game through his charity North Star Reach, which is a summer camp in Pinckney, Mich. that provides life-changing camping experiences for children with serious health challenges.

Sponsors also include Adidas and Top Cat Sales, who are pitching in to cover stadium costs.