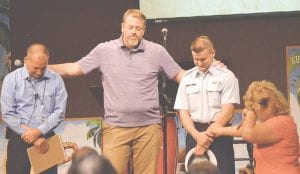 FLUSHING — After several months out at sea, coast guardsman Mason Herr made an unexpected return home on Sunday.

Herr, a Petty Officer Third Class in the United States Coast Guard, surprised his family and friends by appearing during the morning service at the Flushing Community Church of the Nazarene.

The Flushing native was greeted with hugs from his parents and cheers from the congregation—who all thought that he was still on his most recent deployment.

That is, all except for Herr’s younger brother, Nolan, and his pastor, Terry Bate.

Originally, Herr was expected to return home in mid-August from his tour in the Caribbean, but a tropical storm extended the deployment by several weeks.

However, unknown to his family, Herr was granted leave in accordance with his original timetable. He said this sudden turn of events gave him the perfect opportunity to concoct a surprise military homecoming.

“I called Nolan to let him know what was going on,” he said. “He was the only one in the family who knew I was coming back, so we formed a plan to keep the surprise under wraps.”

Herr arrived in Flushing on Aug. 11 and stayed at a friend’s house to “lay low.” Meanwhile, he arranged the surprise homecoming with his pastor.

On Sunday morning, Herr took up his position backstage at the church, waiting as a video played on the sanctuary’s big screen. It was a short movie Herr had made while stationed near Guantanamo Bay.

With the audience’s attention on the screen, he emerged from behind the stage.

“It was overwhelming,” Herr said about his family’s reaction to his entrance. “I don’t get to see them as much as I’d like to. It feels good to be back.”

Herr said his return was made even more special because it coordinated with his father’s birthday and his parent’s 25th wedding anniversary. His video, in fact, was partly a birthday tribute to his father.

“I just told him how much I admired him and how I’m grateful for how he’s set me up for success in life,” Herr said.

The 20-year-old also said he is also grateful for his upbringing in Flushing, which he considers his hometown no matter where he’s stationed.

“I just want to thank the community of Flushing for being the rock that supports me while I’m way,” he said. “The town has molded me into the person I am today.”

Herr, who enlisted in the Coast Guard last September, serves on the Coast Guard cutter Reliance as both an officer and an Operations Specialist. His most recent missions have revolved mostly around gathering intel and preventing drugs and migrants from being smuggled into the U.S.

Herr graduated from Flushing High School in 2017, where he played football and captained the track team. He was also heavily involved with the Boy Scouts, earning Eagle Scout recognition.