Coats of many colors, sizes at annual church giveaway 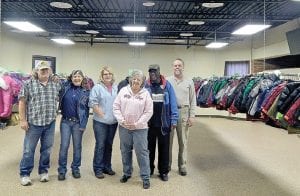 Karin Smith and her husband, James, (2nd and 3rd from right) who started an annual coat giveaway 13 years ago are now helped by fellow church members. Here the crew of volunteers had just completed unboxing and hanging about 500 coats for the free distribution held last Friday.

FLINT TWP. — Hundreds of families went shopping for warm winter coats last weekend. But instead of going to the mall, they turned to Living Word Church of God, 6325 Calkins Road, for its annual coat giveaway.

The church began offering the free coat program about three years ago, spearheaded by Katharina (everybody calls her Karin) and James Smith, who are members.

But the Smiths, who live in the Beecher area, started the program 13 years ago, working with Carriage Town Ministries, the YWCA Women’s Shelter and the Salvation Army on Coldwater Road.

This year the Smith’s collected more than 500 new or nearly new coats in all sizes for men, women and children, valued at about $3,300. Volunteers spent last Thursday morning organizing them by size and hanging them on rods suspended from the ceiling in the church’s fellowship hall.

The church helps with funds to buy the coats but in the beginning the Smiths spent their own money. 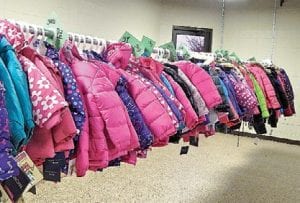 “I’ve been homeless, I’ve been cold and I’ve been hungry,” said Karin Smith. “The Lord laid it on our hearts to do this. God can take your past and use it to do something positive.”

Originally from Germany where she met her husband who was in the military, she moved to the states in 1961. Married for more than 50 years now, they started their life together before the U.S. Supreme Court overturned anti-miscegenation laws that made it illegal in many states for interracial couples to marry. Michigan was not one of those states.

Other church members help the couple to organize and run the coat distribution but the Smiths do the bulk of the collection work.

She starts “in the wee, wee hours” on Thanksgiving morning when Meijers has coats marked down to $10 each, she said.

Smith spends a lot of time throughout the year continually checking for markdowns at various stores including Kmart, Target and Goodwill (which resells new Target merchandise.”

“I don’t pay full price,” she said, adding that she has asked stores for bulk discounts but so far not received any.

Some coats are stored at the church but most are kept in the basement of the Smith’s home until time for the next distribution.

“It’s a lot of work,” Smith said with a smile, but added they she and her husband are getting up in years and having health issues, so she’s asked her pastor and the congregation to pray about younger leadership taking over.

“I don’t mind helping but you are constantly going to check to see if things have been marked down,” she said. “It’s a lot of work.”

Families to benefit from her tireless efforts were expected to start lining up early for best pick in the giveaway that started at 10 a.m. last Friday. To eliminate chaos, they are given numbers in the order of arrival and asked to wait in the sanctuary until their number is called, Smith said.

They have to show identification to prove how many children they have but then are allowed to choose what they want. A huge assortment of hats, gloves and scarves are also provided.

Extra-large sizes for men and women are the hardest to come by and the first to go, Smith said, adding that it takes an extra long time for those sizes to get marked down, especially when the economy was bad.

The giveaway is billed as a two-day event but gets pretty picked over by the end of the first day.

The church’s pastor takes some leftovers to a school where he works. Teachers who are members of the congregation also take coats to children they know who need them, Smith said.