Cold putting chill on the start of golf season 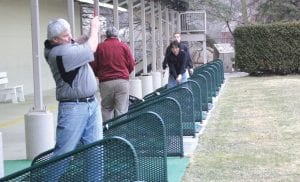 Golfers under heated tees get in a few last swings before closing time at the King Par driving range Monday. The facility is filling all 32 heated tees on a regular basis these days.

AREAWIDE — Spring officially started eight days ago. So where is the golf?

Mother Nature isn’t being nearly as kind as she was last year, when warm temperatures and dry conditions had golfers flocking to area courses as early as the first week of March. The warmth stuck around, too, as courses around the state experienced record numbers of rounds played in 2012. “Summer” lasted well into October, and diehard duffers pushed the season into December.

What a difference a year makes. Golfers are still waiting to hit the links this year, and April is four days away. Leagues are scheduled to begin soon, but few will want to start in 40- degree weather.

Courses like Genesee Valley Meadows are groomed and ready for business but are just waiting for the ground to thaw.

True golf addicts can’t wait for the sun, and they take refuge on the heated tees at King Par. A recent visit found a few diehards still swinging away minutes before closing time, but all 32 tees are filled earlier in the day.

“The range is pretty busy,” said sales manager Walt Sabat. “If it’s 50 degrees, it’s just crazy here, and if it’s cold, it’s still full. Then, in the afternoon after school’s out, we’ve got all the boys teams here.”

Nine high school teams are using King Par as their training ground because it’s the only game in town. Carman-Ainsworth, Swartz Creek, Davison, Flushing, Corunna, Montrose, Mt. Morris, Lake Fenton and Detroit Catholic Central work with each other to make sure each gets maximum range time, Sabat said.

“Those teams would probably be playing on their courses by now, but they’re just not open and they have no place to hit yet,” said Sabat.

Time is money in golf, and the sport plays a huge role in the economy. According to the latest figures from the PGA of America, the total impact of golf in America in 2011 was $176.8 billion, and the industry produced two million jobs that year.

If there’s any benefit to the lingering cold, it’s that most recreational golf leagues still have openings. Call your favorite course to see if there’s a spot.