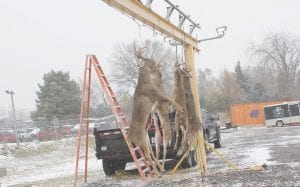 The annual Genesee County pole at Madden’s Lounge on State Road was won by John Bradburn with a 14-point buck. Bradburn took home the firstplace prize of a 450 Bushmaster from The Gun Barn in Otisville. Jon Jensen won the second-place price of a 450 Bushmaster from Madden’s and third place was won by Dawn Debuck, who received a $300 gift card for The Gun Barn. By the end of the day, only 13 bucks were entered into the contest with each entry receiving a $100-minimum gift card from one of the new sponsors, including The Gun Barn, Coho Ridge Archery in Davison, Fishing Tackle Grab Bag in Davison and William’s Gun Sight.

“It was a beautiful Michigan night to be out talking to everyone and we had hundreds of visitors despite the weather. It was a good time to be had by all,” said Marty Madden of Madden’s Lounge.

The Lapeer pole at Ray C’s Harley Davidson had 11 by mid-day with just a handful of onlookers as the weather took a turn for the worse, while the North Branch pole had six deer and very few people admiring the deer at 2:30 p.m. when the County Press swung by for a photo. Two different groups of three stopped for brief look and then headed back to the comfort of their vehicles.

Campbell’s Local Harvest in Imlay City had an empty pole around 2 p.m. and Kings Mill had three deer on display. In neighboring Davison at the Genesee County pole, seven bucks were on display by mid-day.

A steady snow was falling by that point and by dusk, and the area looked more like a snow globe that had been shook. Many deer simply hunkered down for the evening, leaving many a hunter with nothing more than cold feed and disappointment. Friday morning’s steady snow made for an unusually quite second day of the season. Not everyone had a disappointing hunt though, and judging by the neck sizes on some of the bucks, the rut is definitely in full swing. Below are the winners from each pole, and several other photos submitted by area hunters who bagged a big buck.