Colin Mochrie & Brad Sherwood, stars of ‘Whose Line is it Anyway?,’ to take the stage 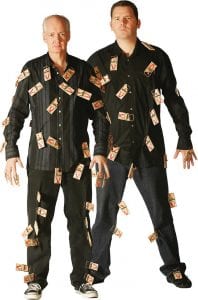 FLINT
— Get ready for a night of comedy when The Whiting, 1241 E. Kearsley St., presents Colin Mochrie & Brad Sherwood, stars of Whose
Line Is It Anyway?
8 p.m. Jan. 22. After the enormous success of Whose Line Is It Anyway?,
Mochrie and Sherwood, two stars of the Emmy-nominated series, have teamed up to present an evening of extraordinary improvisational comedy. The show, now in its fourth year, continues to remain among the most popular live comedy shows touring the country. Using their quick wit, Mochrie and Sherwood take contributions from the audience to create hilarious and original interactive scenes just like a live version of Whose Line!

Mochrie’s first appearance on Whose
Line is it Anyway?,
the British version, was in 1991. His role on the American Whose Line
got off to a rocky start when ABC wanted to drop Mochrie because they thought the comedian looked too old and not hip enough. Thankfully those involved in the show held their ground, and ABC was smart enough to see that talent and creativity were more important than ‘hip’ and the fans agreed,

making Mochrie a popular mainstay on the American Whose Line stage.

Mochrie has spent time touring with the Improv All Stars, and he continues to travel with An Evening with Colin
Mochrie and Brad Sherwood
regularly. He has also been busy appearing in commercials as the Nabisco Snack Fairy. He’s been heavily involved in independent and small movie projects and is even involved in ‘The Movie Co-op’, which is a Canadian venture to help produce great Canadian movies funded by and run by the artists themselves.

Sherwood is a regular cast member on ABC’s Whose Line Is It Anyway?
and was a regular on the British version on Comedy Central as well. His credits include The Drew Carey Show,
The Green Screen Show, The Smartest
Guy In Town, Jury Duty, VH-1’s I Love
The 70s, 80s, & 90s
and more than 100 sketch appearances on The Tonight
Show with Jay Leno.
Brad’s other past credits include a season on LA Law, To
Tell The Truth, The Newz,
guest hosting Talk Soup
and hosting The New
Dating Game.

Ticket prices range from $25 – $50 and are available online at TheWhiting.com,
by phoning 810-237- 7333 and by walk up at The Ticket Center located within The Whiting. Their performance is generously supported by Health Alliance Plan, McLaren Regional Medical Center, US 103.1, Joe FM, ABC 12, WFNT, Michigan Public Radio and the Charles Stewart Mott Foundation.