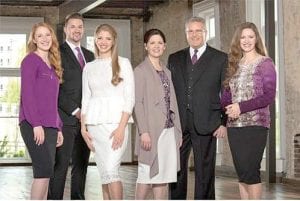 The nationally known Collingsworth Family will perform Sunday in a concert at the Central Church of the Nazarene.

This will be a non-ticketed event but a love offering will be received.

Now in their 29th year of musical ministry, the Collingsworth Family began performing at a church camp in Petersburg, Michigan in August 1986 and have since sung and played nationwide and internationally, according to a biography published on their web site at www.thecollingsworthfamily.com/home.shtml

Their newest full-scale studio project, “The Lord is Good”, was released in September 2013 and includes their national radio single, “How Great His Love for Me,” written by Jeff Bumgardner and Joel Lindsey.

A previously released “first” in the Christian music industry, were two full length music videos filmed at the famed Music Hall in Cincinnati, OH, the home of the world-class Cincinnati Symphony Orchestra. The two videos were the first Christian concerts ever to be filmed at a major symphony venue.

On March 1, 2011, The Collingsworth Family entered a multi year, exclusive recording agreement with StowTown Records, Nashville, TN. Their recordings are marketed nationally to Christian markets through Provident Distribution and to secular markets by Sony Music. On December 8, 2014, they signed an exclusive booking agreement with The Harper Agency of Goodlettsville, TN, which now represents them in all personal appearances.