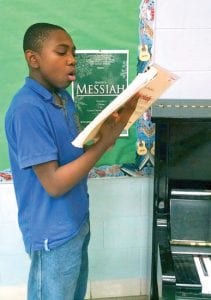 Myckal Powell, a CAHS 9th grader, is practicing for his solo in this Friday’s presentation of Handel’s “Messiah.”

FLINT TWP. — Myckal Powell, a ninth grader at Carman-Ainsworth High School, will be the opening soloist in the annual community production of Handel’s “Messiah,” at 7 p.m. Friday, December 4, hosted by Central Church of the Nazarene, 1261 W. Bristol Road.

Myckal is one of about 40 C-AHS students performing in the holiday concert that is a collaboration by four area high schools – C-A, Flushing, Grand Blanc – joined by the New Century Chorale, an adult choir from Grand Blanc and a full professional orchestra.

Myckal auditioned and won the tenor solo featured in the first part of the three-part production, said Faith Yassick, CAHS director of choirs, who also will be one of four concert conductors

Myckal’s solo is “Comfort Ye,” which makes him the first student in the performance to open with a solo, Yassick said. Students from other schools also have solos.

This is the fourth year for the collaborative concert and the second year it has been held at Central Church, Yassick said.

“Messiah” is divided into three parts, she said. The first part dramatizes the birth of Jesus Christ, as told in the Old Testament. The second part covers his life and death and the third part covers his resurrection.

Classic favorites to be performed include “Hallelujah,” “And The Glory Of The Lord, “and “For Unto Us A Child Is Born” and “Worthy is the Lamb,” said Yassick.

All together there will be about 225 voices performing.

Yassick said that C-A performers have been practicing separately at school but will join the others for three rehearsals prior to the concert.

Tickets are $10 each for adults and $5 for students. They can be purchased in advance at the Family Christian Store, G-3577 Miller Road, at the Genesee Crossing Shop Center. Or tickets can be purchased at the door or online at www.itickets.com/ events/353332.html.