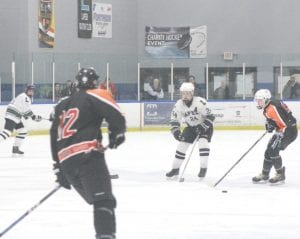 SCF’s Preston Weisberg controls the puck during a game against Lapeer at the Polar Palace.

FLINT TWP. – Swartz Creek/Clio/ Flushing’s varsity hockey team pulled out a wild win, 5-4, over the United (Kearsley/Brandon/Holly/Lake Fenton) at Iceland Arena on Saturday. The whole game went back-and-forth, but the game was tied after each of the first two stanzas.

Jake Castles got the first SCF goal, assisted by Dylan Stankewicz. Brendan Ogle then netted one with the help of Kam Houle and Cody Harburn netted a shorthanded tally. Castles got his second of the night, assisted by Stankewicz and Harburn, and Stankewicz netted the game winner from Castles and Seth Crompton with only 10 seconds left.

SCF welcomed Fenton/Linden to Iceland Arena last Wednesday, battling hard in a 6-5 loss. Nik Calugaru ripped the mesh with the assistance of Crompton and then Calugaru buried an unassisted tally. Ogle got a goal with the help of Castles, which Ogle followed up with another goal, assisted by Stankewicz. Castles buried SCF’s final goal of the night.

SCF welcomed DeWitt on Wednesday, following press deadlines, and is at the Grand Blanc Tournament at the Dort Federal Event Center this weekend. – B.P.

The Carman-Ainsworth bowlers were at Monitor Lanes on Tuesday, where the girls’ team posted a 20-10 victory over Lapeer. Other details were not available.

At Grand Blanc Lanes last Wednesday, the Lady Cavs placed fourth with 25 and the boys ended up in seventh with 13. Individual scores were not available. – B.P.