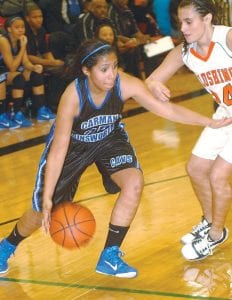 Jasmine Jones and the Lady Cavs just couldn’t get past Flushing this year.

SAGINAW — It was a remarkable turnaround season, but it still ended too soon for Carman-Ainsworth’s girls’ basketball team.

The Lady Cavaliers bowed out in the first round of the Class A district tournament Monday with a 63-47 loss to Flushing at Saginaw Arthur Hill. It was their third loss to the Lady Raiders this year, and it sent them packing just three days after the end of the regular season.

But Carman went home with a much better final record than it produced the previous two years. The Lady Cavs finished at 10-11, a campaign that included their first win over Flint Powers Catholic in five years and a respectable 3-3 mark in the Big Nine Conference, just one game behind co-champions Flushing and Powers.

Carman’s biggest thorn all year was Flushing, and Monday’s game was no different. The Lady Raiders roared out to an 18-5 first-quarter lead, and Carman spent the rest of the night trying to catch up. Flushing extended its lead to 35-18 with a 17-13 third quarter, a nearimpossible deficit to make up.

The Lady Cavs gave it their best shot, outscoring the Lady Raiders, 14-10, in the third period to pull within 45-32 going into the final eight minutes. But Flushing (14-7) sealed the outcome with an 18-15 fourth period and advanced to last night’s semifinal game against Flint Northern.

As it has done all season, Carman got contributions from many sources, as nine different Lady Cavs scored. Ashley Hall led with 13 points and Jasmine Boyd scored 12. Brandi Rimmer had five, and Jasmine Jones and Kinterra Tomlin added four each. Emily Wendling led Flushing with 18 points, Kelsey Gerhardt scored 12 and Kacey Davidson had 10.

Carman capped its regular season last Friday with a 54-52, overtime victory at Davison. The Lady Cavs took a 10-3 first-quarter lead, but Davison came back with a 9-7 second period to close within 17-12. The teams played to a 14-14 tie in the third quarter to lead Carman ahead, 31-26, going into the fourth, but Davison rallied with a 16-11 final period to force OT.

Carman then outscored the Lady Cardinals, 12-10, in overtime to win it. Jones led this time with 11 points and Boyd scored 10. Hall added nine, Sarah Satkowiak had six and Tiara Gooch scored five.

The Lady Cavs will lose only four seniors from this year’s team: Boyd, Rimmer, Tanara Crawford and Nicole Blair. Jones, Gooch, Satkowiak, Kapri Thompson and Tierra Mitchell are juniors, Hall and Tomlin are sophomores and Aliah Stinnett is a freshman.