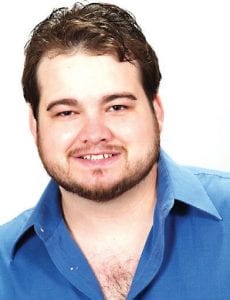 BURTON — Brad Leo Lyon isn’t sure how many people are going to show up at the casting call at Sharky’s Sports Bar for his upcoming film Little Creeps.

Although Lyon holds regular auditions for film projects, the March 13 date will be the only audition for the horror/comedy genre film.

A large number of principal and supporting roles will be determined between 10 a.m.-6 p.m. and doled out later.

Acting experience is not required. Resumes and head shots will be accepted but are not mandatory.

“From my experience, those in Genesee County and area communities have been very active in auditioning for films,” said Lyon.

Lyon’s film auditions draw aspiring actors from all over the country, some arriving from Canada.

“Over the course of two previous auditions for Minor League: A Football Story we had over 1350 people in line,” remarked Lyon, best known as a comedy genre filmmaker. “Yet, those numbers were during the warm summer and we don’t anticipate reaching that type of number with our current weather conditions.”

Filming for Little Creeps begins in March and on location throughout Genesee and neighboring counties.

The R-rated script follows college professor Lee Arenburg as he comes across the Demonicron, a book rumored to open the gates of Hell. Deciding to conjure up the demons trapped within its pages, the professor only manages to utter half of the arcane words. The unfinished incantation produces only pint-sized demons. The rest follows a comical romp as the professor tries to control the chaos caused by the little hellions.

“Growing up, I was a big horror/monster movie fan dating back to my early childhood. Eventually, the combination of comedy and horror could only be expected as it is one of my favorite forms of film,” explained Lyon.

“I’ve known them for a long long time and I was obliged to do it,” said Drudi.