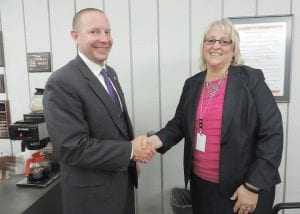 C-A Superintendent Steve Tunnicliff, who is resigning at the end of the month, congratulates newly hired assistant superintendent Cathy McGilvery at the C-A school board meeting last week.

FLINT TWP. — A transition in leadership for Carman-Ainsworth Community Schools entailed three actions by the school board at its meeting last week.

The first was approving the contract for new Superintendent Eddie L. Kindle, who was appointed in early April and will take the helm on June 4. For the past two years, he has served as assistant superintendent for curriculum and human resources.

Secondly, the board appointed Catherine McGilvery as the new assistant superintendent for curriculum and human resources, filling the vacancy created by Kindle’s promotion. McGilvery is currently principle at Rankin Elementary School.

Third, the board saluted outgoing Superintendent Steve Tunnicliff, who attended his final C-A school board meeting last week, having announced his resignation in March, effective June 3.

Kindle’s three-year contract through June 30, 2019 includes a salary of $160,000 per year with benefits including health, disability and life insurance; 24 vacation days annually and reimbursement for professional dues and business expenses.

In a farewell to Tunnicliff, Board President Patrice Hatcher praised his “exceptional leadership” and said he was “leaving Carman-Ainsworth in far better condition” than he found it.

“When Dr. Tunnicliff took this position, we were facing a severe financial challenge, our enrollment was declining and we were in need of some right sizing,’’ Hatcher said. “

She also noted that in 2015 Tunnicliff was named Michigan Association of School Administrator’s Region V Superintendent of the Year.

Tunnicliff worked for the district 12 years including stints as the high school principal and assistant superintendent before being promoted to the top job four years ago. He has accepted a new position as associate superintendent for the Genesee Intermediate School District.