Comings and goings at Oakbrook Square 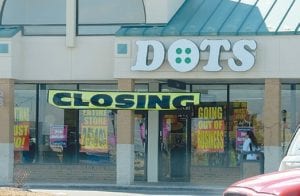 Below, Dressbarn reopened about two weeks ago after shutting down a few months for an extensive interior renovation. Right, all Dots stores are going out of business after 25 years.

FLINT TWP. — As one retail door reopens, another is closing at the Oakbrook Square shopping plaza on Linden Road.

The Dressbarn women’s retail store reopened about two weeks ago after being completely closed a few months during an extensive renovation of the 8,004 squarefoot space.

But about three doors down, the display windows of thee Dots women’s discount fashion store are plastered with going-outof business signs.

Oakbrook Square, which opened in 1982, had recently returned to full occupancy in November following the opening of a Shoe Carnival store. The 18-store shopping plaza faces Genesee Valley Center mall and is operated by Ramco- Gershenson Properties Trust based in Farmington Hills. Major tenants include TJ Maxx, Hobby Lobby and Buffalo Wild Wings.

Ohio-based Dots LLC, filed for Chapter 11 bankruptcy reorganization in mid-January and announced plans to close 36 of its approximately 400 stores, which are located mostly in the Midwest, southeast and east. But on Feb. 27,Gordon Brothers Group, a global restructuring and liquidation firm, announced that it has been appointed by the bankruptcy court as store closing processor for Dots remaining 360 stores. 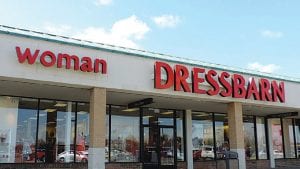 A going out of business sale began March 1. The 4.975 square-foot Flint Township store is one of about still 18 operating in Michigan.

Dots website has shut down except for a notice that the going out of business sale is in progress and that stores still are being restocked with new spring merchandise.

“This discount retailer is already known for its affordable pricing and we encourage customers to visit their local stores to find even greater discounts while the selection lasts,” said Rick Edwards, Co-President of Gordon Brothers Group’s Retail Division, in a press release.

Store locations will remain open until all merchandise has been sold, the release said. Dots is owned by New-York based Irving Place Capital which acquired it in 2011.

At the other end of the retail life spectrum, the Dressbarn store is welcoming back customers with a sale after its renovation completion.

With over 800 stores nationwide, Dressbarn is part of the Ascena Retail Group, Inc. which also includes the Lane Bryant, Catherine’s, Maurice’s and Justice chains.