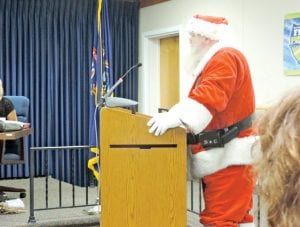 Among several pro and cons speakers at the township’s Aug. 11 meeting, regarding street soliciting, was this man dressed as Santa Claus, who spoke against the ordinance and in support of the Old Newsboys annual street drive to raise funds to provide Christmas gifts for disadvantaged children.

FLINT TWP. — Looks like the township’s panhandling problem will not be resolved any time soon.

A controversial begging and soliciting ordinance amendment aimed at curbing street beggars is on hold while an advisory committee weighs the pros and cons in a series of public meetings.

The committee first met on Aug. 27 and the first of three public hearings was scheduled to take place this week on Wednesday, Sept. 10.

The committee is made up of about 12 interested people, said Township Supervisor Karyn Miller. That committee set three dates for further discussion of the issue.

“When people come to the public hearing, they will have to speak only on that topic and will be given three minutes to speak,’’ Miller reported to the township board at its Sept. 2 meeting.Two more follow-up public meetings have been scheduled for Wed, Sept. 17 at 1:30 p.m. and Wed. October 1 at 1:30 p.m. before the committee is expected to make a recommendation to the township board.

That makes Oct. 6 the earliest date the matter may come back before the township board for a final decision. The proposed amendment already passed a first reading in a 6-1 board vote on July 7.

Typically ordinance amendments come up for second reading and adoption at the next regularly scheduled board meeting.

But complications arose. The board’s July 21 meeting was canceled due to lack of a quorum and the regular first Monday board meeting in August was pushed back a week because of elections.

At the board’s one and only meeting last month on Aug. 11, several people oppos- ing the ordinance spoke during public comment. Several also spoke in favor of the ordinance.

A sternly worded letter of caution arrived hours before the meeting from the American Civiil Liberties Union (ACLU) also swayed the board’s decision to put off passing the ordinance to allow more time for community input. Similar ordinances are in effect in communities in western Michigan to remedy a growing problem of beggars standing on street corners.

Before a 2012 court ruling which deemed street begging as a form of freedom of speech, police could simply arrest beggars under a public nuisance ordinance.

But the U.S. District Court ruled that peaceful panhandling is no different from other charitable groups asking for donations on public streets.

In April 2013, a Kent County Circuit Judge upheld an ordinance passed by the City of Kentwood because it “applies to all solicitation, regardless of the message or the recipient, and it is reasonable and necessary manner of regulating traffic for the safety of motor vehicle operators, passengers and pedestrians.”

To comply with legalities, Flint Township’s ban also must apply to all street soliciting including legitimate charities such as the Old Newsboys. Other communities in Genesee County reportedly are awaiting the outcome of Flint Township’s ordinance before looking at passing a similar one.

The proposed ordinance identifies eight unlawful means of soliciting including the controversial “from any operator of a motor vehicle that is in traffic on a public street (with provisions). It also cites other prohibited places such as within 15 feet of a bus stop, pay phone, or ATM machine and on private property without the owner’s permission.