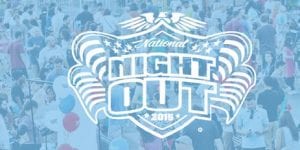 FLINT TWP.— Look forward to a bigger and better National Night Out (NNO) observance this year at the township Police Station on Norko Drive.

Police Chief George Sippert announced that he has invited Mundy Township and Swartz Creek to participate in this year’s event, to be held on August 4.

“They will be working in conjunction with us,” he said. “It will be a team effort. We are hoping to draw in more residents from our neighboring communities.”

Begun in 1981, NNO is an annual nationwide community-building campaign, spearheaded by the National Association of Town Watch to promote police-community relationships and foster neighborhood camaraderie and safety.

More than 37.8 million neighbors in 16,124 communities across America are expected to participate in this year’s event.

Chief Sippert said that more details about the local event, including the time and activities, will be announced closer to the date.

More than 25 vendors participated in the 2014 event.