Honoring those who served 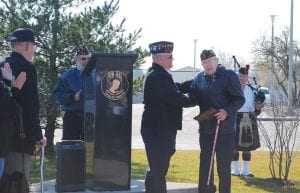 The Veterans Day services began at 11:11 a.m. with a welcome by Post Commander Shawn McLeod and an invocation by Chaplain John Gilbert, both from American Legion Post #294. The crowd, which was gathered around the memorial, then heard from guest speaker Lloyd Coon, a U.S. Marine Corps Veteran of World War II. Wreaths were placed at the memorial by various veterans organizations, followed by a firing of the volleys by VFW/AMVETS Post #3720 Honor Guard. Following a benediction by Gilbert, McLeod made several announcements during the services, including hon- oring Harold Casey, 90, for 43 years of service to American Legion Post #294.

Casey, a World War II veteran, thanked the post and community after receiving his recognition.

“I’ve had a lot of surprises in my life, and this is a real surprise,” he said. “I’m proud of this, and I’m proud that I served my country in World War II.” 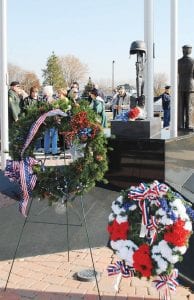 After honoring Casey, McLeod called Rick Henry, chairman of the Veterans Memorial Committee, to the front and announced that the VFW/AMVETS Post #3720 and Ladies Auxiliary each had a gift for the memorial. Commander Dean Meisegeier from the VFW/AMVETS presented Henry with a $4,000 check and a representative from the Ladies Auxiliary presented him with a $1,000 check, all going to benefit the Swartz Creek Area Veterans Memorial.

“Thank you all for coming out,” said McLeod as he concluded the services. “It shows patriotism to be here, and it shows honor and respect for those who served.”

Following the services, the crowd was entertained by bagpipe player Mike Kamel, an Elf Khurafeh Highlander, while McLeod went through the crowd, pinning white corsages on veterans. A light, traditional luncheon was hosted by American Legion Post #294 at its headquarters, 3440 Morrish Rd. 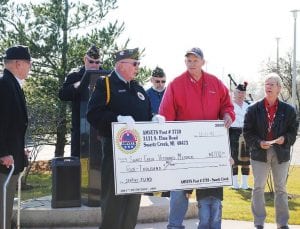 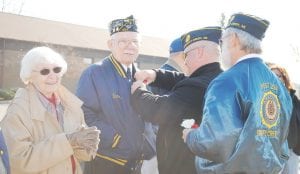 McLeod pins a corsage on Dave Morton, center, a World War II veteran and member of the American Legion Post #294 while Morton’s wife, Maryanne, looks on. 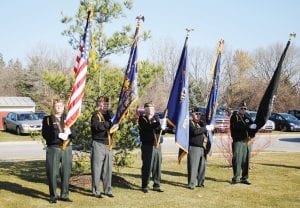 The VFW/AMVETS Post #3720 Honor Guard was at the services.