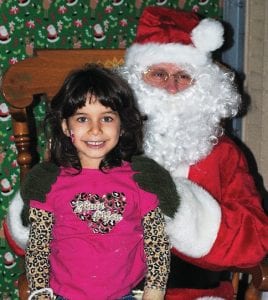 FLINT TWP.
— Members of the community were able to have themselves an early, Merry Christmas during Carman- Ainsworth’s 3rd Annual Winter Fest, held Dec. 4 at Carman-Ainsworth High School.

Upon arriving in the cafeteria, children were able to sit on Santa’s lap to tell him what they wanted for Christmas. Each child then received free gifts, which included a coloring book and crayons, a truck, stuffed animal and Barbie. They also received a free picture with Santa. Organizers said they planned to have enough toys for 400 children, and the items were donated by The Old Newsboys and Toys for Tots.

While the children visited Santa and received toys, families were entertained by a variety of performers including the Salvation Army Band, the Carman-Ainsworth Middle School 6th Grade Choir, Smooth Steps Dance Studio, the CAMS 7th and 8th Grade Choir, the Carman-Ainsworth High School Theater, Dye Elementary and the Carman- Ainsworth High School Band. Children received a special treat when Supt. Bill Haley read Twas the Night Before Christmas
to them during the event.

Free hot chocolate and doughnuts were provided to attendees who received admission by bringing a non-perishable food item, a gently-used coat, an unwrapped toy or a monetary donation. Donations went to support the Food Bank of Eastern Michigan, The Salvation Army, U.S. Marines Toys for Tots and The Old Newsboys.

Winter Fest was hosted by Men at W.O.R.K. and emceed by Tom Klee, Doug Metiver and Shawn Maurer. The event also was aided by Sue Miller, Benji Jones, Dan Martin and the Carman-Ainsworth Fine Arts Departments.


More From News Go To The News Section