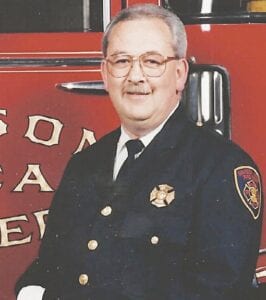 DAVISON — Retired Davison Fire Chief Jack C. Somers will be remembered by some for his service to the community, others for his honorable military service in Vietnam and by many for being the best friend he could possibly be.

To all who knew him, however, he will be missed.

He proudly served his community for more than 23 years with the Davison- Richfield Fire Department where he was Fire Chief from 1994 until 1999.

Current Davison Fire Chief Brian Flewelling said Somers had a big impact on him when he was younger, and he credits the entire Somers family with his decision to become a firefighter.

He said he grew up with Somers’ sons and nephews, many of whom became firefighters themselves and some serve today in the Davison-Richfield Fire Department under his command.

“Jack took a chance on a lot of us as kids,” he said. “He was chief when I got hired. He was a good leader; he was easy to talk to and he had a calm demeanor. He was a good fire officer.”

Flewelling said he thinks Somers leaves behind a legacy in the Davison-Richfield Fire Department, having inspired a generation of firefighters, including his sons and his grandson, Blake, who now serves in the department.

“That family is the whole reason I got into fire service,” he said. “They inspired me to get into it. I think Jack’s proudest legacy is his grandson, Blake, now serving in the fire department. He was tremendously proud of all of them.”

Jim Hansen, owner of Hansen Funeral Home in Davison, said he and Somers were friends for 50 years and worked together in 1971 when Raysin Funeral Home (now Allen Funeral Home) ran its ambulance service.

“I think he was a very well-loved person on the fire department, anything he did, he did with class,” said Hansen. “He was always compassionate and caring.”

He said Somers was instrumental in getting the Raysins to buy the first new ambulance in Davison, rather than relying on old hearses. Hansen added Somers’ career with the Davison- Richfield Fire Department speaks for itself.

“He’s been a good friend for 50 years and I enjoyed being around him,” said Hansen. “We’ve worked together, and we’ve worked opposite of each other. When I was on the city council, sometimes I agreed with him, sometimes I didn’t. We had that love-hate relationship for eons.”

Somers was a member of St. John the Evangelist Catholic Church and had been employed by General Motors Chevrolet Division for over thirty years until his retirement.

He was joined in marriage to Connie Newcombe on Jan. 25, 1975 in Davison. Answering the call of his country, Somers proudly served in the U.S. Army during the Vietnam War and was a Purple Heart recipient.

Somers was a 1967 graduate of Flint Northwestern High School, and member of Davison IOOF Lodge.

He leaves to cherish his memory his wife of 46 years Connie, his children; Todd and wife Kristina, and Corey and wife Helena Somers. He also leaves his loving grandchildren; Abbey, Blake, Kelsey, Keagen, Piper, Lilly, brother Gary and wife Jane Somers and a host of extended family. He is preceded in death by nephew Steven Somers.

Those desiring may make contributions in Jack’s memory to the Davison- Richfield Fire Association.