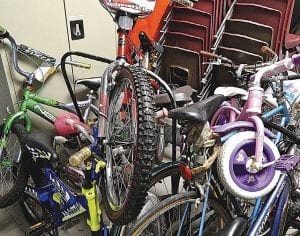 A small pile of donated bikes are accumulating in a storage closet at Baker College-Flint waiting for the start of a grant-funded Bicycle Repair project to be given to Carman-Ainsworth students whose families can’t afford to buy one.

The community service project is seeded by a $1,000 Active Living Minigrant from Safe and Active Genesee for Everyone (SAGE), an initiative that promotes safe opportunities for physical activity in Genesee County.

The Bike Project targets students whose families cannot afford a bike, said Maureen Miller, co-coordinator of the project who is also the Director of Health & Fitness at Baker and the Student Clubs Coordinator.

A long-range goal is to open the bike project to schools countywide but Carman-Ainsworth students were chosen initially because the school district has several cooperative projects with Baker, Miller said.

The process has begun with the collection of donated bikes from the community, said Miller, who is stashing them in storage closet until volunteers are ready to go to work in mid-August.

Volunteers still are being recruited and will consist of Baker and C-A students, Baker staff and anyone else interested in helping, Miller said.

Project workers will have use of the shop at the Baker Center for Transportation on Dort Hwy. in Flint.

Bikes of any age, size and condition are being accepted to be refurbished by project crews. A badly rusted donated bike is on display in a Baker showcase to get the word out to students and staff.

Carman-Ainsworth officials will be handling the give-away portion. The distribution process, including where families can sign up, will be finalized after elementary school principals and counselors return to school in mid-August, said Dave Swierpel, C-A director of community education. He said one C-A school will be chosen to work with at the outset of the project.

Project volunteers also are planning to host a community workshop in October at C-A Middle School to teach skills such as tightening a bike chain, Miller said. Donations of bicycles and parts will be accepted at that event and ongoing. Even bikes found discarded at the curb can be salvaged and refurbished,

“Matt (Assenmacher) will teach us what we need to know,” Miller said.

About a dozen volunteers have signed up so far and the goal is to have a few bikes ready to be given away by the time school starts.

Anyone with an unwanted bicycle or parts to donate or who is interested in volunteering for the repair team can contact Miller at 810-766-8752.