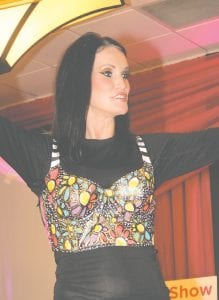 This hand-painted brassiere was courtesy of artist Julie Abbot, who is featured at the Fenton Eclections Fashion boutique. Photos by Paula K. Schmidt

MUNDY TWP. — “Nobody has the right to do nothing,” said Emcee Chris Swanson, at the emotional highlight of the annual Pink Palooza event which brings breast cancer survivors together with community donors to raise money for the Hurley Breast Cancer Patient Navigation Program.

He detailed the story of how not only had Weinstein Electric given last minute notice they were unable to use their table, but about how one woman, who had just had a three-hour surgery the day before, had been able to attend with her husband because the company had gifted the seats to them.

Swanson worked the crowd into an emotional outpouring which had people snaked around the large dining room, bringing whatever cash they had on hand and piling it onto the couple’s table as a donation for the Patient Navigator program.

The Breast Cancer Program at Hurley Medical Center is certified by the National Accreditation Program for Breast Centers (NAPBC), the only accrediting body of the American College of Surgeons’ Commission on Cancer that accredits breast programs. This means they have shown a firm commitment to offer patients every significant advantage in their battle against breast disease. 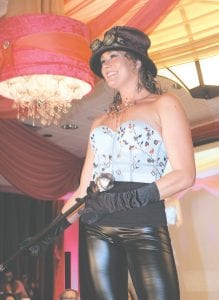 This lovely creation was named after Ceres, a Roman goddess of fertility.

Every penny raised at Pink Palooza stays local, helping local breast cancer survivors. The highlight of the evening is a decorated bra auction. There were many creative bras on the runway; the final entry featuring a beautiful pink corset signed by food celebrities Mark Wahlberg and Chef Paul Wahlberg. 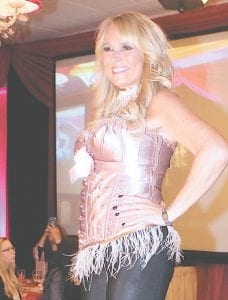 The Hurley and Financial Plus corset raised $12,500. Special thanks to title sponsor Shea Automotive Group, Phil Shaltz and Vince Lorraine for the corset donations. Funds were also raised via numerous local and national businesses who gave gift packages or gift cards/certificates to be sold or auctioned off for the cause. Many other businesses sponsored various events of the evening. Swanson credited Judy Jones who had raised $11,000 by organizing a skeet/ sporting clays event at Grand Blanc Huntsmen’s club this year as well. 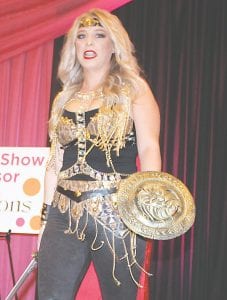 This model carried off hints of Xena, the warrior princess in the bra called “Glamour Gladiator.”