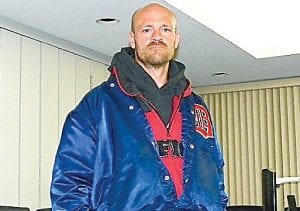 Kenny Aiello was one of the vocal parents at the meeting with school board officials.

FLINT TWP. — Parents and residents opposed to the announced closing of Woodland Elementary School at the end of the school year apparently are not going down without a fight.

After a meeting Friday with Superintendent Bill Haley and other school officials to voice their concerns, several parents and residents said they will be coming back for the regular school board meeting on April 10 to get answers from the full board about why no community input was sought before the decision was made to close the 55-year-old elementary school.

“I firmly believe as the school board you all made some poor decisions to do this too fast,” said Kenny Aiello, who son is in the second grade at Woodland. He said he has been circulating a petition opposing the closing.

The petition drive is not necessarily to keep Woodland open, but to put it to a vote of community, said Kristen Csirke, who organized the community meeting with Haley.

Csirke lives across the street from the school in a house she bought three years ago because it was near the school she planned for her children to attend, she said.

“This is a major community change,’‘ she said. “ What would have helped the situation is just a little forewarning. It looks really bad when it just popped up.”

Parents also objected to the amount of time children will spend on buses to one of the four remaining elementary schools. That coupled with a later start time could mean the children getting home after dark in the winter, they said.

Some were upset that third graders reassigned to Dillon Elementary, which serves K-3, will have to change schools again after only one year. Woodland is a K-5 school.

Haley said that so far all parents’ requests to reassign their child to another school have been met.

Haley had Atlantis’ principal, staff members and students on hand to answer questions.

It will be a closed campus, meaning students won’t be roaming through the neighborhood during the day, said Bart Zachrich, Atlantis interim principal and formerly Woodland’s principal.

He explained the screening process for Atlantis students and its behavior policy. Most Atlantis students are from Carman- Ainsworth but others come from districts countywide including Flushing, Swartz Creek, Grand Blanc and Flint, Zachrich said.

Haley reiterated financial details sent out after the board’s announcement in early March to close Woodland. Key factors include declining enrollment at Woodland and reduced per pupil income across the board.

Haley said closing Woodland will save the district about $500,000 next school year.

He said Woodland was chosen to close instead of comparable Dillon because it was necessary to keep two elementary schools operating on the district’s south side. Carman Park Elementary on the south side was closed in 2005 and converted into an accelerated high school — one of three alternative high schools run jointly with the Bendle School District.

The meeting ended with many Woodland supporters still angry about the changes. There were murmurs about recalls and voting current school board members out.