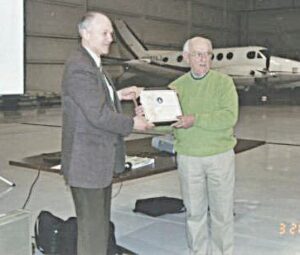 FLINT TWP. — Members of the Flint area aviation community are remembering Fred McClellan for his contributions to Flint Bishop International Airport and his passion for all things aircraft-related.

McClellan, owner of McClellan Aircraft Maintenance on the grounds of Bishop Airport, passed away on Aug. 15 at the age of 88. A celebration of his life was held at Community of Christ Church in Flint on Sept. 1, and his body was interred with military honors at Great Lakes National Cemetery in Holly.

To honor McClellan’s memory, T-hangar tenants at Bishop Airport arranged for a B-17 flyover at his memorial service.

For decades, McClellan was a fixture at Bishop Airport, repairing light aircraft and providing maintenance for the airlines when jets landed at the airport. The Grand Blanc resident started as the head of maintenance for Flint Air Service before branching off to start his own business.

When he needed more space to fix airplanes, McClellan moved his business to a hangar at the east end of Bishop Airport. Altogether, he worked on planes at the airport for over 50 years.

In addition to being a mechanic and business owner, McClellan was an avid pilot who enjoyed flying single engine and multi-engine airplanes.

Dave McCredie, a close friend of McClellan’s for decades, said that McClellan never really retired from aircraft maintenance and only started to gradually scale back from his work in recent years. He also said that McClellan coupled his love for aircraft with a determination to treat customers with integrity.

“He wanted to be remembered for keeping his word; it was everything to him,” McCredie said. “He loved to go to work every day, and he had a wonderful sense of humor. Above all, he had an absolute passion for aircraft and flying.”

McClellan was born and raised in Milo, MO., and was an avid sportsman in school, playing baseball, basketball, football and golf. After graduating from high school and Fort Scott Junior College, he served two years in the United States Army.

McClellan married Juanita Werst in 1956 and moved to Michigan. The couple lived happily until Juanita’s passing in 1974. McClellan then married Mary Pohly in 1980 and enjoyed 41 years of marriage with her.

In lieu of flowers, contributions may be made in McClellan’s name to Community of Christ Church (Bristolwood Branch) in Flint or the Wounded Warrior Project.