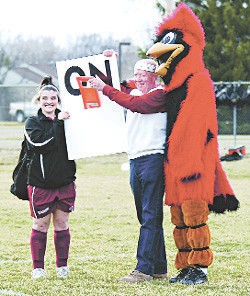 DAVISON — Randy Braden was a man who walked softly but carried a big stick and will be remembered by many for his years of undaunted support of Davison High School Athletics.

Braden, 81, died May 19 at his home. Many remember him as “Superfan” who was a fixture at many Davison schools’ athletic events, always with his big walking stick in hand and words of support and friendship for athletes, coaches and parents alike.

Dave Beamer, Davison Athletic Director, said students have noticed Braden’s absence in recent months, especially during spring sports when he was frequently on the sidelines cheering on the teams – especially soccer.

“He’ll be sorely missed by everybody at Davison athletics,” said Beamer. “It was always great to see smiling face, with his walking stick and work boots. The kids absolutely loved him.”

He said there were times they would have Braden join them on the bus to attend away games, so he could lend his support and cheer the student athletes on.

Beamer said Braden has been ill for many months and the athletes noticed he wasn’t attending their games and meets this spring.

“I know the kids have been asking about him, the spring season was always when we saw him the most,” said Beamer. “He loved soccer, he loved being out there and walking around from game to game.”

A big supporter of the new football field with artificial turf recently installed at Cardinal Stadium, Beamer said it was unfortunate Braden was not able to watch a game played on it.

The loss of Superfan was felt by many across the community who appreciated Braden’s friendship and support over the years.

For Christian Pumphrey, a former soccer player and now assistant coach for boys and girl’s soccer in Davison, he said he was fortunate to get to know Braden.

“It is truly special to be a Cardinal, and nobody showed it more than Randy Braden,” said Pumphrey, a 2013 graduate of Davison High School. “From my time playing to my time coaching here at Davison, I was fortunate enough to really get close to Davison High’s biggest fan.

“He was always there for me with encouraging words no matter how I was playing or how the game was going,” he said.

Pumphrey said if you were to ask any athlete or coach from Davison High School, they would likely have own special Superfan story.

“He could be spotted at every home sporting event and made a lasting positive impression on the community as a whole,” said Pumphrey. “Even if you didn’t know him by name, everyone recognized ‘Superfan’ and his walking stick.”

He said Braden’s passing is a tremendous loss for all of Davison, adding he will be greatly missed by anyone who had the pleasure of meeting him.

“Randy may have left us but the legend of Superfan will last forever,” he said.

“Randy was a proud Marine and a huge supporter of everything ‘Davison Cardinals’ and the Davison Community,” said Lori Tallman, a trustee on the Davison Township Board of Trustees. “He truly was ‘Super Fan’. His presence on the sidelines will be missed but he now will have the best seat in the house!”

Tim Bishop, a parent of student-athletes in Davison Community Schools and mayor of Davison, described Braden as one of the most upbeat people he’d ever met.

“Randy was one of the most positive people I’ve ever met,” he said. “His face only knew how to smile, or grin and it was contagious if you stood and talked to him long enough.”

Braden retired from Eastern Airlines in 1980 after more than 20 years of service. He is survived by three children, Brenda Braden, Debbie Braden and Michael Braden; five grandchildren, Ashley, Bridget, Corey, Justin and Jason; nine great-grandchildren; sister, Nila May Banfield; many other loving family members and friends. He was preceded in death by his parents, Loyal and Ethel Braden and six siblings.

No services will be held at this time. In lieu of flowers, memorial contributions may be made to the Davison Athletic Club or Outreach East, in Braden’s memory.