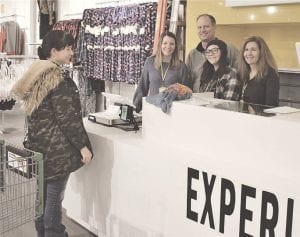 Katherine Stump of Fenton was scooping up the deals at an early shopping VIP event last week just before the new Community Threads store opened in the mall. Photos by Paula K. Schmidt

FLINT TWP. — When you think “thrift store” you might think dirty and grungy and poor quality or old merchandise, but Allen Ryckman, owner of Community Threads of Fenton, is trying to change your mind—and seems to be doing so.

He has opened his second location, Experience Community Threads, in the former Rue 21 space next to Macy’s in the Genesee Valley Mall. The new thrift store will sell new and gently used merchandise, from clothing to furniture and household goods to toys and backto school items.

Although he says he is only about 85 percent stocked, the clean, brightly-lit store looks like any fashionable outfit in the mall, with a good selection of stuff to prepare you for summer – lots of swimwear, beach toys and other goodies.

More of the merchandise is not used, consisting of manufacturer close-outs with deeply discounted prices to fit any shopper’s budget. Katherine Stump of Fenton is a fan of the first store and stopped by one of the VIP events held last week.

Stump said she likes how roomy the store is and that the merchandise is not crunched together on the racks.

Ryckman employs a business model which hires students to give them real world job experience in a retail setting. He said with the holiday season ending he was able to get some good, quality applicants and is thrilled to be opening the new space.

Ryckman’s original plan is to have 33 percent of the staff to be students by the end of the first year, 66 percent at the end of the second year and 100 percent student-run by the end of the third year. He said he is a little ahead on the number of students, currently having six of 16.

He intends by the end of the third year, they will be actively engaged in the core business functions and decision making; but right now, he is working on helping them find their specialties and leveraging those skills to help them in their development.

“I am looking forward to helping them grow as part of a long-term plan,” Ryckmann explained.